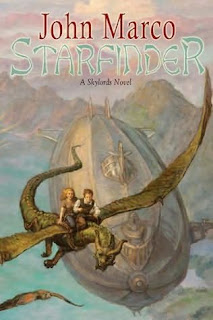 I've been a fan of John Marco ever since I picked up his epic fantasy debut The Jackal of Nar about five years ago (to this day, it remains one my best book-related impulse buys). To my mind, John is a writer whose name doesn't pop up as much as it should do in online debate about epic fantasy - his Tyrants and Kings trilogy is up there with some of the best.

It had been a while since I'd read any of his novels (I'd looked into the Lukian trilogy, but found it hard to get in the UK and never got around to ordering them online). I was pretty excited therefore when John asked whether I'd like to receive a proof of his latest novel, Starfinder - a novel that treads new ground for John, in that it is his first novel aimed at a younger demographic.

The story focuses on the young protagonists of Moth and Fiona, two orphans from very different backgrounds. Moth dreams of becoming a skyknight while holding down a menial job at the aerodrome, while Fiona is the grandaughter of the brusque governor of Calio. Both of them long to escape their monotonous lives...until suddenly their wish is granted. The death of Moth's ward, Leroux, leaves him in possession of a stunning secret and a very special artifact. Bound by his promise to Leroux, and desperate to escape the clutches of Fiona's grandfather - who desires the artifact for his own purposes - Moth and Fiona escape into the Reach, said to be the gateway to another world ruled by the proud skylords. Little do they realise that the item they carry will bring a new era of war to the new world they find themselves in...

Something I've always liked about Marco's work is his tendency to mix things up a little, and Starfinder is no different: mythical beasts, magic and steampunk technology all come together in a very satisfying mix that embraces some classical elements of the genre and combines them with a more modern approach.

What really struck me about Starfinder is that it demonstrates what a good storyteller John Marco is. Let's be straight about this - being a good writer and a good storyteller are not the same thing. Take the classic example of David Gemmell: his prose was solid but generally unspectacular, but he excelled as a storyteller - he understood how to tell a tale. Marco is the same - he takes all these ingredients and skilfully spins a ripping yarn (and his prose - while understandably different to his other work, due to his target audience - flows very well indeed).

Starfinder is a classic adventure story, it's about two kids getting into trouble and learning about life in the process. But there's a lot more there too, plenty of other themes such as the futility of war and the possibility of redemption. In fact, the novel is something of a tour de force: the plot is tight and well-constructed (with a surprisingly epic climax), the characterisation is strong with good depth and development and the world that Marco has created is vibrant and comes across really well through the prose (I was reminded very much of Narnia, minus the more ridiculous aspects such as Santa making an appearance).

One of the best things about Starfinder is that you get the impression that Marco was seriously enjoying himself as he wrote it; the novel really crackles with his enthusiasm for aviation, for fantasy, for storytelling. While the novel is aimed at younger readers, there's plenty here for older readers to enjoy - I particularly liked the skylords and their society, which I thought was portrayed very well, while the relationship between Moth and his skylord antagonist was excellently handled.

Verdict: If, for the beach this summer, you want a fun, accessible novel packed with action, imagination and engaging characters, then look no further. Starfinder is a really enjoyable read that oozes Marco's love of storytelling and fantasy. Don't be put off by the YA tag. I look forward to the next novel in the series.
Posted by James at 12:36

Just finished the second Joe Abercrombie novel (superb) but am going to hold off on the Last Argument of Kings for a while so that I will have something to look forward to.

After I read John Marco's fantastic post and your recommendation of the Jackal of Nar I bought a copy off Amazon. I'll let you know what I think.

I'll be interested to see what you think about The Jackal of Nar, Iain. It's not to everyone's tastes and is a bit of a slow-burner in some respects, but if you stick with it I think you'll find it a very rewarding read. And the second novel in the trilogy - The Grand Design - is superb.

Recently I bought the Tyrants and Kings trilogy. Not decided yet when to read them.

Some time ago I read Graeme's Starfinder review and got the impression that this book is not really what I want. Now I read your review which is a bit different especially concerning the YA factor. And it seems I need a third review to build up my mind. This ain't bad because I think it's better to spend some time with information about a book before buying it depending on a great blurb.

Thanks for the recommendation of Marco's work, I may have to check out The Jackal of Nar...and Tyrants and Kings. I love discovering new fantasy writers...great post. : )

EdifanoB: Yeah, Graeme liked it but I think he found the YA factor to be a bit of an issue...the book clearly is YA, and that will definitely influence plenty of readers one way or the other, but it wasn't really an issue for me. YA doesn't equal bad, as many people seem to think.

Alexander: Glad you enjoyed the post! And do check out Jackal if you get the chance. It's not for everyone, admittedly, but if you like something a bit different then it might be right up your street.

James: Also YA books can be a good read for adults.I don't mind to read YA books.
Sometimes the YA factor is overrated.
So I will have a look at Starfinder

Hey James. Hope you don't mind but I felt compelled to jump in here, first to thank you for the great review, but also to put in my two cents. I don't know where this "YA equals bad" thing started but I've seen it myself and find it silly. Anyone badmouthing YA should realize that there's very likely someone standing behind them snickering at their love of fantasy. Is there bad YA? Of course, just as there are bad mysteries, thrillers, etc. "Starfinder" is unabashedly YA. No apologies from me on this, ever.

Thanks again for the review!