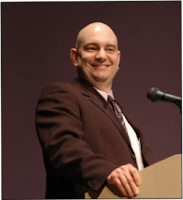 ...over at BSC. For those of you wondering who Lou Anders is and why you should bother reading an interview with him, Lou is the editorial director of Pyr in the States, a genre imprint with a very good reputation and various award nominations.

Naturally Lou has plenty of thought-provoking views on the current state of the genre:


"I’ve been very interested in the return of sword & sorcery to prominence. This dovetails with an opinion of mine that what the majority of genre readers want are “good stories well told.” I tend to avoid slipstream or literary fantasy in favor of recognizable science fiction and fantasy stories told at a higher level of craft. I think the reason so many adults are migrating to the Young Adult category is that they have a craving for action and adventure that isn’t being served, and I think the return of S&S is part of that trend, as is the fascination with steampunk."

Check out the full interview.
Posted by James at 16:52

This is part of an ongoing private conversation I've been having with Lou for a while. He's not only a great guy and a brilliant editor, he's extremely knowledgable about both the industry and the fiction.

The digital age is accelerating the turnover of fantasy trends. We had years and years of Tolkien-influenced stories. Now we can see the latest hot trend come and go in 12 months. One by-product of this is that readers are becoming quickly jaded. They need new experiences, quickly, and particularly sensation, which ironically harks back to the pulp age.

Sales trends suggest "literary" fantasy - whatever that might be - is declining while the more adventurous end of the spectrum is rapidly increasing. Interesting times for authors, publishers and readers.