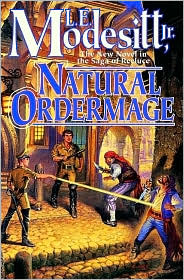 Gather around friends, as it's time again to delve into the craptastic world of rubbish fantasy art.

The crap fantasy cover featured this time is L. E. Modesitt's 'Natural Ordermage' (perhaps I ought to do a crap fantasy book title feature as well - that would be right up there).

It looks like a Nazi with a fetish firing a laser beam with his finger into a pirate. When I write those words down it sounds awesome. When I see the picture, I shudder.

This looks like Sweet swiped his own cover of Fires of Heaven with clueless Rand, used the same background and threw in some of his type characters.

Or at the least used the same cityscape.

Mark, sounds like the shell of a cool story!