If you thought you'd been waiting a long time for A Dance With Dragons... 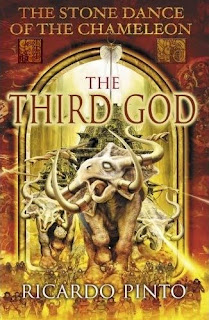 ...then spare a thought for fans of Ricardo Pinto's The Stone Dance of the Chameleon trilogy. The first novel, The Chosen, was published way back in 1999. The second book, The Standing Dead, was released in 2001.

8 years later, the concluding novel, The Third God, is finally nearing publication. Apparently the delay was partly due to the author's house being severely damaged by fire.

Anyway, the point is...having to wait 4 years for A Dance with Dragons is small change compared to the delays fans of other authors have had to suffer! ;)

As for The Stone Dance of the Chameleon, I might have to give it a go. I recall looking at the first novel on the shelf in my local bookstore way back in 1999 when it was released, and remember being put off by the fact that it had a quote on the inside cover (from some author...can't remember who) that said something like "There's no magic swords or enchanted forests...this is the sort of direction fantasy needs to take in order to thrive."

I was totally put off by that blurb, as magic swords and enchanted forests were exactly what I wanted...and now, ten years later, I want to pick it up because it's not got them in it!

By the way, head over to Graeme's blog if you fancy winning the whole The Stone Dance of the Chameleon trilogy, as he's got some sets up for grabs!
Posted by James at 21:17

An odd little factoid: Ricardo Pinto used to make computer games. I found this out because my uncle used to work with him! They made a Spectrum game called 'Gyron' and also a port of the space-trading game 'Elite'. It's a small world...

Not read 'Stone Dance' yet but I'll add it to the already overflowing list - cheers for the competition info!

Melanie Rawn The Captal's Tower (Book 3 of Exiles trilogy) has that beat by two years. I have been waiting for the sequel to The The Mageborn Traitor for close to half my life.

Alex: That's pretty random! As I said, I've not read the books myself, so I can't recommend them. Certainly sound a bit different though.

Anon: Yeah, I think there's one or two authors who have taken even longer than that - 25, 30 years to follow up their books? Can't remember who though.

David Gerrold's War Against the Chtorr series is about 20 years overdue from its last instalment, IIRC. The seventh book of Patrick Tilley's Amtrak Wars is also 19 years overdue.

The one that has them all beat is Harlan Ellison's Last Dangerous Visions anthology, currently clocking in at roughly 35 years past its original publication date. He occasionally says it will eventually appear.

Thanks Adam, I knew I could rely on you to fill in the gaps! ;)

I read about the first hundred pages of The Chosen. Couldn't get into it. Maybe it's time to try again.

There's another Amtrak book. I thought that was finished!!

There were supposed to be 12 Amtrak books altogether, divided into two 'generations' (a bit like the Star Wars movies, although Tilley was writing them the right way around this time) with Book 7 picking up 15-20 years after Book 6. So it's finished in the sense that you can read it and get a reasonable sense of closure.

Tilley, now in his 80s, has said he does want to finish the series but is hedging his bets and writing three new books rather than six. But that was some time ago and still no word on them.

The Stone Dance of the Chameleon is definitely worth reading.