Cover art and blurb for 'The King of the Crags' 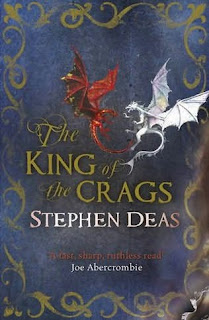 Really like this cover for Stephen Deas's upcoming sequel to The Adamantine Palace, due for release in April 2010 from Gollancz.

"Prince Jehal has murdered, poisoned and betrayed his way to the top. There is a new speaker for the realms, his opposition has been crushed, now he just has to enjoy the fruits of power. And yet . . .

He feels more for the wife he married for power than perhaps he should and his lover knows it. And out in the realms those loyal to the old regime are still plotting. and there are rumours that the Red Riders, heralds of revolution and doom are on the ride. And still no-one has found the famous white dragon. The dragon that, if it lived, will have long since recovered from the effects of the alchemical liquid fed to the dragons of the realms to keep them docile, to block their memories of a time when they ruled and the world burned . . ."

Sounds very promising. Really need to get around to reading The Adamantine Palace so I'm ready for when The King of the Crags lands...
Posted by James at 13:19

I'm waiting for this, also. I've a feeling it will surpass the reading experience of book #1. Nice to know it's just around the corner, too.

The first one was excellent. Sounds like the sequel will be just as mired in politics and blood.