Firstly, most of you have probably noticed that new posts here have been few and far between recently. No sinister reasons as to why - I've just been extremely busy both at work and at home, with various things demanding my attention. Unfortunately the blogging has had to take a back seat, though I hope that in the reasonably near future normal service will be resumed.

Anyway, for the time being check out the extremely cool artwork for Jasper Kent's Thirteen Years Later: 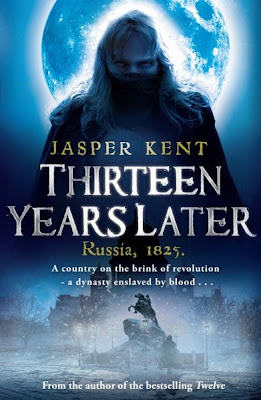 And here's the blurb:

"In the summer of 1812, before the Oprichniki came to the help of Mother Russia in her fight against Napoleon, one of their number overheard a conversation between his master, Zmyeevich, and another. He learned of a feud, an unholy grievance between Zmyeevich and the rulers of Russia, the Romanovs, that began a century earlier at the time of Peter the Great. Indeed, while the Oprichniki's primary reason for journeying to Russia is to stop the French, one of them takes a different path. For he has a different agenda, he is to be the nightmare instrument of revenge on the Romanovs. But thanks to the valiant efforts of Captain Aleksei Ivanovich Danilov, this maverick monster would not be able to begin to complete his task until thirteen years later. Now that time has come: it is 1825 and Russia once more stands on the brink of anarchy, and this time the threat comes from within..."

Twelve remains one of my favourite books of the year, and I'm highly anticipating this sequel. As for the cover art, I think it's great - a good example of how do a 'figure' cover properly.

Twelve has been a great read and I look forward to Thirteen Years Later. The cover looks awesome.

I liked "Twelve" a lot, so I am really looking forward to the "Thirteen Years Later". I also like that the cover keeps the line of the first one :)

Yeah, I also like the way the style of the cover is very similar to the first - good continuity.