Artwork and a (very rough!) blurb for 'Sea of Ghosts'

Courtesy of the lovely ladies at Tor UK, here's the artwork for Alan Campbell's upcoming novel Sea of Ghosts, book one of The Gravedigger Chronicles. 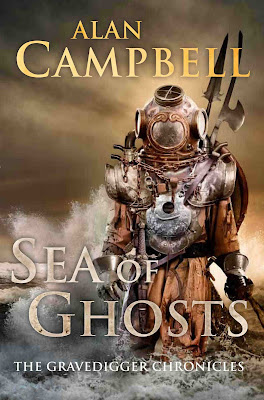 And here's a very rough blurb (well, more of a description really, but you get the idea).

"Sea of Ghosts is the terrific new novel from Deepgate Codex author Alan Campbell. Set in a world of entropic sorcerers, poisoned seas, the Drowned, drug-addicted dragons, Deadships and a powerful sisterhood of telepaths, and featuring ex-soldier Colonel Thomas Granger, this is an incredible novel of imaginative fantasy with strong characters, non-stop action and tremendous descriptive world-building. I've just finished editing it and have had to go back and read it again just for the sheer pleasure of it! We've got a terrific jacket design from artist Larry Rostant and this will be a lead fantasy hardback for Tor in 2011."

Sounds pretty cool. For some reason that I still can't fathom, I couldn't get into Scar Night. I'm hoping I'll get on better with Sea of Ghosts though, because it sounds really interesting - you can always rely on Alan Campbell to create an intriguing, vivid world.

Sea of Ghosts is due for release in April 2011.

Oh, and here's a tiny snippet:

"Granger hit the brine and plunged under it, and for a moment the world became a haze of brown and gold: sunlight rippling across the rooftops of the old Unmer dwellings down below; the Excelsior's anchor chain; a shoal of marionette fish hanging in the deep like harvest festival baubles. His ears resounded with gloop and clang of sudden pressure change. And then the pain hit him."

Oh my God, I'm seeing Bioshock everywhere. For the love of all that's holy, someone help me!

That there, for instance, is a Big Daddy. Albeit with a pointy thing and a dress. Looks good on the old beast, I'll say.

In all seriousness, I couldn't be more psyched for Sea of Ghosts. I've been reading the Deepgate Codex in preparation for a themed week and I've finally gotten it - third time's the charm, I suppose.

Anyway. Roll on April. Next Spring's going to be hella busy, isn't it?

Want to read a short description? Then follow this link.