Ah, Golden Axe 2 - one of the finest hack n' slash games ever made. Button-mashing at its finest. Not big, not clever, but plenty of fun. Especially when played with a friend that was as enthusiastic for battling hordes of enemies with big choppers (ahem) as you were.

This was how many of my Saturday afternoons as a youngster were spent: embarking on a perilous quest with my friend to defeat the EVIL DARK GUILD and save the land. Which had been saved in the first game, but apparently needed saving again.

There was no fighting over who got to play as which character; our choices were well defined. I always played as the male barbarian Ax Battler (who, despite his name, wielded a sword - go figure) while my friend always plumped for the dwarf Gilius Thunderhead (who, according to the box art, is possibly the buffest dwarf ever). We rarely played as Tyris Flare, though now and again one of us would pick her "because she has the best magic." The other player would nod sagely, knowing full well that the real reason the other had chosen her was because she was a hot amazonian. Come on, she is. Look at the box. In fact, is it just me or is the way she's riding that dragon rather...actually, let's just move on. 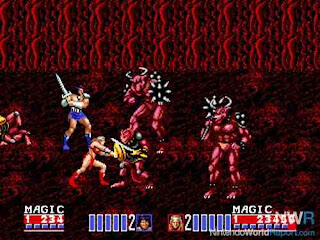 The gameplay was basic and had barely changed from the first game: mash buttons to kill enemies, repeat until no enemies left. Progress onwards, repeat process. Goggle at Tyris Flare. Mash buttons...

But for two young teenagers who had yet to discover girls (who needed a girl when you had Tyris Flare?), it was remarkably good fun. Gameplay was punctuated with squeals of geeky delight such as "Omg dude, a purple lizardman" and "Omg, look at how smashed up that portcullis is...OMG HUGE MONSTER. Quick, wind magic!" And so on. 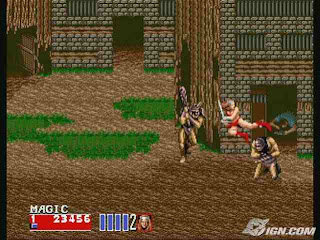 Golden Axe 2 was far from the best game to appear on the Sega Megadrive, and certainly had plenty of flaws, such as the crap sound effects (the enemies' death groan sounded like a kid puking) and the lack of variety in the enemies (changing the colour of the sprite doesn't really count...). Yet there was something very appealing about making a ripped barbarian kick countless enemies' asses with a huge sword.