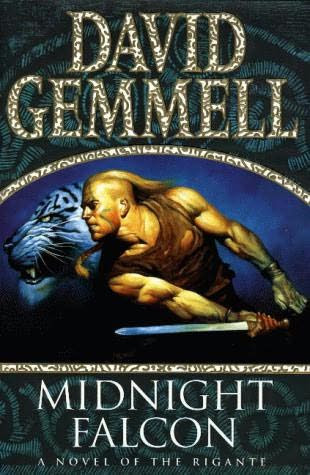 Until recently I knew what to expect when picking up a Gemmell novel for the first time. Moreover, I knew I would enjoy it. Then I read Sword in the Storm and my perception changed.

Sword was the first Gemmell novel I've read where I felt the characterisation was (surprisingly) a little weak in places, where the plot was sluggish in parts and where - most significantly of all - I wondered, as I read, whether I really cared what happened. Upon completing Sword I realised that it wasn't a bad novel (Gemmell didn't write bad novels) but that it didn't work for me in the same way that his other novels (particularly the Drenai books) did. Of course, part of this could be explained by the fact that Sword was a bit different in the sense that Gemmell was introducing a new world, a completely new setting, and of course this would take time to bed in. Still, I did hope that the second novel in the Rigante series would be a significant improvement, a return to the sparkling form he showed in some of his earlier novels.

Any fears I had upon starting Midnight Falcon quickly proved unfounded.

The story picks up around seventeen years after the events of the first book. The main focus of the novel is Bane, the bastard son of Connovar, a young man capable of great humanity and yet struggling with the bitter resentment caused by his father's rejection. His path takes him to the corrupt and decadent city of Stone, capital of a huge empire, where a single act of violence changes his life forever.

Bane then trains as a gladiator, honing his skills and waiting for the chance to take his revenge. Little does he realise that only he can save the Rigante - his own people that previously rejected him - from the onslaught of Stone's armies. But to do so he'll have to face the ghosts of his past and accept the burden of his own heritage.

I mentioned in my Sword review that one of the main positives of the novel was the character of Connovar, who in my opinion was one of Gemmell's best characters. Bane however, is even better. Possessed of a great warmth, yet driven by bitterness and anger, he's an unpredictable character yet instantly likable. Watching his development over the course of the novel is hugely satisfying, and an example of Gemmell's characterisation skills at their peak. Characters have to change for a story to be believable, and the Bane at the end bears little resemblance to the Bane at the start.

Pleasingly, the supporting characters in Midnight Falcon are equally good. From Rage, the former gladiator given to introspection; to Jasaray, the mild-mannered general; to Voltan, the merciless leader of the Knights of Stone, Gemmell has created a strong cast of characters with believable, complex relationships. I'd even go as far in saying that the characterisation in Midnight Falcon eclipses any other Gemmell book I've read.

The plot was a bone of contention in Sword. Not so in Midnight Falcon. Gemmell has crafted an absorbing story of love and loss, loyalty and treachery, blood and conquest, with a surprising number of twists and turns. It's epic, pacy and utterly enthralling. As always Gemmell uses his characters to explore a variety of themes, in particular looking at the futility of war, the nature of revenge and how mankind can rise above conflict and bloodshed. Gemmell has always imbued his novels with meaning, but in Midnight Falcon he took it to a whole new level. Quite simply, it's hugely inspiring.

I've considered the novel from several different angles, looking for flaws, but I just can't find any. The plot is masterfully constructed and totally gripping, the characters possess great depth and the story itself echoes with all the hallmarks of genuine legends, with an intense climax.

Midnight Falcon is not my favourite David Gemmell novel, but it's undoubtedly one of his best.

Man, it's always good to read a new review of Gemmell's work. Which one is the best in your opinion?

Tough question! From the novels of his that I've read, I'd say that 'Legend' is possibly the best. The writing is a little clunky at times (he admitted that himself) but the story is timeless, and the plot is extremely tight and pacy. Good characters too.

Waylander is also a very good novel, as is Hero in the Shadows (terrific ending to that one).

I've heard many say however that his Troy trilogy is his finest work, so I look forward to reading that.

Anybody else have a particular favourite?

Though I'm criminally under-read in all things Gemmell, I did read the first two Rigante novels a few years ago and liked them VERY much.

Robb: I wonder whether the fact that you aren't terribly well-read in Gemmell is related to the fact that he wasn't that well-known in the USA? For some reason I don't think his books ever caught on over on your side of the Atlantic.

It's a shame that his books aren't more popular over there, but his fan-base always was Euro-centric.

So what we need to do is read more Gemmell :).

Waylander and Legend were great, true.

Everyone should read more Gemmell. The world would be a better place, no doubt.

I learned far more about what it takes to be a decent person by reading Gemmell than I ever learned at school, or wherever.