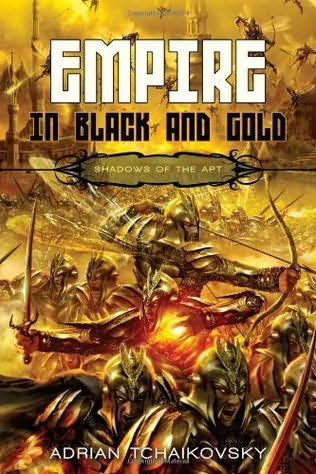 Empire in Black and Gold

It's good to see that - in amidst all the authors who are content to trot out the same old tripe about farmboys and reluctant princes in dull secondary worlds - there are still some writers that attempt to produce something a little different. Writers who actually understand that some degree of innovation is required for the secondary-world fantasy genre to avoid stagnation...and care enough to provide it. British author Adrian Tchaikovsky is one such writer.

Upon first glance, you could be forgiven for thinking that Empire in Black and Gold is just another epic fantasy. An oppressive empire intent on taking over the world, some young heroes - guided by an older mentor - determined to stand in its way, and so on. Nothing special, nothing original there. Until you discover that the humans of this world all possess insect characteristics, and suddenly you've got something totally different.

It's such a simple idea, but hugely effective. Wasp soldiers (like the fellow on the cover) that can sting their enemies...and fly. Mantis warriors with bladed forearms and a furious bloodlust pumping through their veins. The spiders and their crafty intellect, the beetles and their industry...the list goes on. The result is something both familiar and yet totally exotic, a heady mix that just offers so much potential (which Tchaikovsky is quick to exploit). Couple these various insect-kinden with a curious world in which steam/clockwork technology features heavily, and you have a rich, vibrant setting which proves to be a real strength of the novel. There's no bland 13th century Europe replicas here.

Tchaikovsky proves an equally dab hand at populating his world with intriguing characters and competently builds up several believable relationships. The four young protagonists (Salma, Cheerwell, Tynisa and Totho) are perhaps a little stereotyped in parts - Cheerwell, for example, being the classic coming-of-age character - but they're all developed well. Refreshingly, all receive similar amounts of 'screen time' and Tchaikovsky flits smoothly from one POV to another (often within the same chapter, even paragraph). The antagonist - Captain Thalric - is the star of the show for me, a finely-crafted individual who fights a constant battle between his sense of duty and his conscience, a theme that Tchaikovsky handles with commendable depth and skill.

Plenty of other themes are explored as well, such as innovation versus tradition, which lends serious weight to two relationships in the novel. Various complex relationship issues are also probed, adding real depth to the characters involved and serving as a reminder that - for all their insect 'ancestor arts' - the characters are undeniably human. To complement his absorbing world and characters, Tchaikovsky serves up a solid plot with one or two twists that keep things fresh. His prose is admittedly more solid than stylish, and could have done with a bit more of a lyrical flourish at times. That said, the writing is competent, clean and - most importantly - instantly accessible.

The novel's not perfect: the first third is weaker than the rest of the novel and at times seemed a little lightweight, though my initial fears about Empire in Black and Gold straying into YA territory later proved unfounded. Other minor flaws persisted - for example, Cheerwell seeming to hold her own in one or two fights was a little hard to swallow given her clear martial failings earlier on. Such complaints however are minor and don't spoil what is a very promising debut from a bright new British author.

Ultimately, Empire in Black and Gold is as strong a debut as I've seen in some time, with some real innovation and solid characters and worldbuilding. A novel that is refreshing when compared to many recent books in the same genre. Well worth checking out; Tchaikvosky has real potential to become a big name in epic fantasy.

The next book in the series - Dragonfly Falling - is due out early 2009.

If you missed it, be sure to check out the interview I did with Adrian a short while ago.

Adrian's website can be found here.
Posted by James at 01:03