First up, the UK cover for Richard Morgan's The Cold Commands. 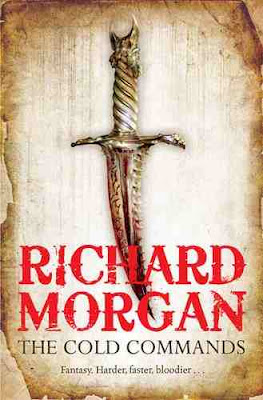 Interestingly, Gollancz seem to have gone for a cover that is similar in style to the UK MMPB version of The Steel Remains, rather than the original hardback cover (which I must say I prefer). By contrast, the US cover is more in keeping with the tone of the UK hardback cover, and I like it more than the above version.

Speaking of Gollancz, they had some interesting news on a couple of book deals today...

First up, Stephen Deas - author of the very successful Adamantine Palace and its follow-up The King of the Crags has set pen to paper on a new deal for more books. From the journal of agent John Jarrold:

John Jarrold has concluded a four-book World Rights deal with Simon Spanton of Gollancz, for fantasy novels by Stephen Deas, for a high five-figure sum in pounds sterling. Deas’ debut novel, a dragon fantasy titled THE ADAMANTINE PALACE, was published by Gollancz in March 2009 and followed by KING OF THE CRAGS this April (the third volume in this series, ORDER OF THE SCALES, will follow early in 2011).

The first book in this deal is a one-off, THE BLACK MAUSOLEUM, related to his dragon fantasies, which will be followed by three further adult titles that entwine that series with Deas’ YA fantasies that open with THE THIEF-TAKER’S APPRENTICE in August. THE BLACK MAUSOLEUM will be delivered in the summer of 2011, with the other books following at yearly intervals.

‘Simon and I did our first three-book deal for Steve at the end of 2007,’ said John Jarrold. ‘With the immediate success of THE ADAMANTINE PALACE in early 2009, we were able to follow that up with another three-book deal that May. And now Steve’s third multi-book deal in two-and-a-half years – which is remarkable testimony to his writing and story-telling, and to the fact that Simon and Gollancz know a good thing when they see one!’

Congratulations to both Stephen and Gollancz.

Gollancz has spent a six figure sum in acquiring a five book young adult fantasy series that had previously been self-published.

Gollancz described the series as about Stonewylde, a hidden idyllic community in Dorset ruled by a Magus. The publisher said: "For Sylvie, a young girl dying in hospital, Stonewylde could be more than a paradise: it could save her life...but for all the harmony of this world, there is something dark lurking at its heart. The magic of Stonewylde could save her...but at what price?"

Redfearn said: "I'm delighted that Kit Berry has joined the Gollancz list. The Stonewylde books are a breath of fresh air, a multi-faceted series with something that will reach out to every reader, and a character to touch every heart. The Stonewylde series will bring a touch of magic to the genre...Kit herself has an amazing story as well: her success as a self-published author is amazing, there’s a wonderful tale behind how she came to write the novels – with magic, romance and a spirited battle against the publishing odds. I can’t wait to work with Kit to bring Stonewylde to a larger audience."

This is an interesting one, make no mistake, both for the amount of money involved and the fact that the author had self-published their work.
Posted by James at 21:57

Of the cover art, I am decidedly not a fan!