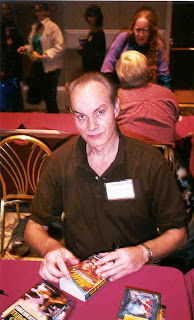 I've mentioned before that David Gemmell is one of my all-time favourite fantasy authors. Gemmell was an inspiration to so many people (the online book of condolence had thousands of entries) and his contribution to the genre was huge. Such a legend of fantasy is deserving of some sort of official legacy.

Fortunately, plenty of other folks thought the same thing - and came up with the David Gemmell Legend Award.

"The DGLA will be presented for the very first time in 2009 for the best Fantasy novel of 2008. The award will be given to a work written in the 'spirit' of the late, great David Gemmell, a true Master of Heroic Fantasy. And, we want YOU - the readers who love the genre to VOTE to decide who makes the Short-list! Just scroll down this page and click on the poll to vote for the book you enjoyed the most in 2008."

You don't have to sign up for membership to vote, but there's an added incentive to do so:

"One lucky Member will be chosen at random to WIN A SIGNED COPY OF ALL THE BOOKS ON THE SHORTLIST!"

Not a bad prize at all! Voting opens on 26 December 2008, so make sure you take five minutes to register your vote!
Posted by James at 13:18

Good to see and read your blog entry about the Award. I'm member.