Tasters of 'City of Ruin' and 'Farlander' 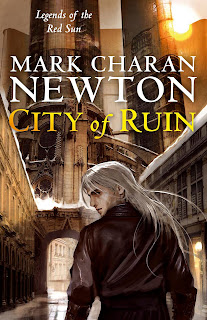 Mark Charan Newton has posted a two-chapter extract from his upcoming novel City of Ruin; here's a snippet:

It entered the deep night, a spider reaching taller than a soldier. Street by street, the thing retched thick silk out of itself to cross the walls, using the fibrous substance to edge along improbable corners. Two, then four legs to scale a wall – six, then eight to get up on to the steps of a watchtower, and it finally located a fine view across the rooftops of Viliren. Fibrous-skin tissue trapped pockets of air and, as tidal roars emerged from the distance, the creature exhaled.

A couple walked by, handy sized enough to slaughter perhaps, their shoes tap-tapping below – but No, not them, not now, it reflected – and it slipped down off the edge of a stone stairway to stand horizontally, at a point where observation took on a new perspective. Snow fell sideways, gentle flecks at first, then something more acute, adding to the brooding intensity of the streets.

Within this umbra, the spider loitered.

As people sifted through the avenues and alleyways, it sensed them by an alteration in the chemistry of the air, in minute vibrations, so no matter where they were they couldn’t hide. With precision, the spider edged across to a firm overhang constructed from more recent, reliable stone. Webbing drooled again, then the creature lowered itself steadily, suspended by silk alone, twisting like a dancer in the wind. Lanes spread before it, grid-like across a plain of mathematical precision. The frequency of citizens passing below had fallen over the last hour; now only a handful of people remained out to brave the extreme cold.

It could almost sense their fear.

One of them had to be chosen – not too young, not too old. The world collapsed into angles and probabilities as the creature made a controlled spiral to the ground.

Scuttling into the darkness, the spider went in search of fresh meat.

The opening lines remind me of Steven Erikson's Deadhouse Gates. I think this is a strong opening - you can't really go wrong with giant, flesh-eating spiders. :) 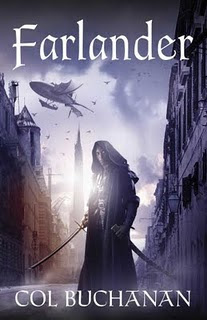 Last night I came across an extract of Col Buchanan's debut novel, Farlander, which is available on the author's website. Here's a sample:

Ash was half dead from exposure when they dragged him into the hall of the ice fortress and threw him at the feet of their king, where he landed on the furs with a grunt of surprise, his body shaking and wanting only to curl itself around the feeble heat of its heart, his panted breaths studding the air with mist.

He had been stripped of his furs, so that he lay curled in underclothing frozen into stiff corrugations of wool. His blade had been taken from him. He was alone. Still, it was as though a wild animal had been thrown into their midst. The villagers hollered through the smoky air and armed tribesmen jabbered for courage as they prodded his sides with bone spears, hopping and circling with caution. They peered through the steam that poured off the stranger like smoke; his breaths spreading in clouds across the matted lice-ridden surface of skins. Through gaps of inhalation, droplets could be seen to drip from his frosted skull, past ice-chips of eyebrows and the crease of eyes, from sharp cheeks and nose, a wedge of beard. Beneath the thawing ice on his face, his skin was black as night water.

The shouts rose in alarm, until it seemed the natives would finish him there and then on the floor.

“Brushka,” growled the king from his throne of bones. His voice rumbled from deep in his chest, breaking around the columns of ice arrayed along the length of the room, rebounding back at him from the high domed ceiling above. At the entrance, tribesmen began to shove the wide-eyed villagers back through the hangings of the archway. They resisted in the main, voicing their complaints; they had been drawn there in the wake of this old foreigner who had staggered in from the storm, and were compelled to see what would happen to him next.

Ash was oblivious to it all. Even the jabs of spears failed to draw his attention. It was the sensation of nearby heat that roused him at last, caused him to lift his head from the floor. A copper brazier sat nearby. Cakes of fat smoked and burned within its innards.

He crawled towards the heat as clubbing spears tried to stop him. The impacts continued as he huddled against the warmth, and though he flinched with every blow he refused to move from it.

“Ak ak!” barked the king, and his command forced the warriors to draw back.

A silence settled in the hall. The flames snapped. The tribesmen breathed as though only returned from a long run. Through it all, a groan of relief sounded loud and clear from Ash’s throat.

If I'm honest, this opening doesn't do a lot for me. I'm not a fan of long sentences, so the first thing I thought was that the opening paragraph is crying out for a full stop in the middle to break it up. The flow of the second paragraph is better, though the prose itself doesn't excite me. I also detest excessive use of invented language, mainly because unless you're Tolkien it invariably sounds crap. Unfortunately there's a lot of it in this opening chapter and I'm not a fan of it at all (it strikes me as unconvincing), though no doubt other readers may feel differently. I'll probably still give Farlander a go if I receive a review copy, though after reading this chapter I feel less inclined to buy it myself if I don't receive one.
Posted by James at 13:19

I'd quite agree with your assessment, James. If I weren't anticipating City of Ruin before - and I was, I'll admit it - I certainly would be now. Great start to what promises to be a great novel.

I agree about the Farlander excerpt. I'm not fond of foreign gibberish, either, and while I tend to write long sentences myself (and then need to edit a few periods in, lol) the first paragraph was a bit messy. Not something that makes me want to go and buy the book right now, but it's not a sample that puts me totally off, either. I'll wait for some reviews. The plus is that it doesn't seem to be a coming of age story like so often in Fantasy. I'm tired of those.

The Farlander excerpt says to me: You will never read this book. He's all over the place with his perspective, and I just can't handle prose that does that. If I'd picked this one off the shelf, I would have put it down after the first page.

Oh, the omniscient perspective didn't bother me. I never even notice it until someone points it out. :) It was more the convoluted sentences and the stilted dialogue that made me aware that I was reading instead of losing myself in the book. I'm aware that reading on screen enhances that feeling for me. (It's the reason I would never get an ebook reading device.)

Mark's is a must!

The Farlander extract was ok-I'll check it more. But the City of Ruin one-ohhh what a tasty extract!