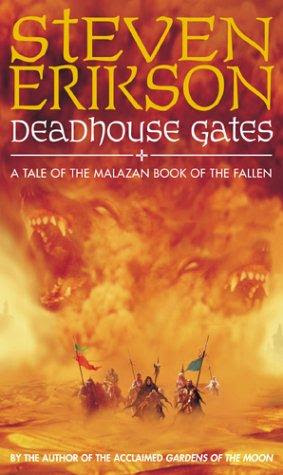 Lethargic - I really like the word; I wonder why I haven't think of it first :p

About the review; I think we all agree about Erikson being bloated etc. etc., but we are all differently affected by this element. I mean, I absolutely loved DG (the best Malazan novel besides MoI) - especially the Coltaine's march you disliked so - but the bloatedness started to grate on me with the fifth book in the series and the feeling is just getting worse and worse (I've up to book 6).

Felisin is one of my favourite chars...ofc she is a bitch? first, she gets "fucked" by her sister and then the situation just gets worse in the camp (plus, the drug abuse doesn't help); duiker and baudin want to help her, but she just doesn't want to be helped - she kind of gave up.

I think ultimately DG didn't work for me because I just wanted more of the same (ie a continuation of GOTM) whereas it delivers a very different story. But on top of that my other criticisms are valid, imo.

Sure, Felisin is a total bitch. I have no problem with that, as that is clearly what Erikson intended. But my problem with her is that she barely changes at all, which to my mind is not acceptable over the course of a 900+ page book.

I am looking forward to Memories of Ice though, it sounds very cool and much closer to what I really wanted in terms of story.

Yeah, I couldn't have a more different opinion about the book.

I loved 3/4 of the book, disliked the ending (too many cheap fight scenes and deus ex machina) and thought Felisin was one of the better characterized, fully realized and most changed characters I've ever read.

When you say "she barely changes at all" I just can't believe it. NO other character I can remember of went through a more challenging and deeply changing journey.

On the other side, I'm pretty sure you'll like MoI. I haven't read it yet, but it's surely a better continuation to GotM.

Which is another difference. I like how the series changes so much from book to book, introducing new characters, fleshing out the world and exploring different themes. With little retreading compared to other fantasy series that are "more of the same".

Abalieno: I know that amazon reviews are a pretty poor indication, but the reviews on amazon US seem split between people who loved the book and people who thought it was ok but was flawed in one or two ways. Whereas I'm in the latter camp, you clearly fall in to the former.

As for Felisin, I'm not saying she's a bad character. She's well fleshed out and an interesting type of character to have as one of the major protagonists. But I just don't see how she changes. Perhaps by the end of the book she's slightly less cynical towards Heboric and perhaps more certain of her future path, but I wouldn't say she undergoes a huge emotional transition. Maybe I missed something...