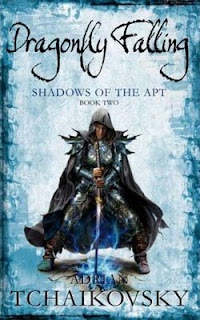 After reading and enjoying Adrian Tchaikovsky's debut novel Empire in Black and Gold last year, I was looking forward to Dragonfly Falling, the second instalment in the Shadows of the Apt series. While Empire did have its drawbacks, I saw enough promise there to believe that Tchaikovsky could deliver a really good series: the world was fascinating, the storyline had the potential to become suitably epic, and there was some good characterisation. All I wanted from Dragonfly Falling was more of the same, but on a more dynamic, epic scale.

Possibly the most pleasing aspect of this novel is the plot. While the storyline of Empire was solid, it took a while to get going and generally you had a feeling as to where it was going. Dragonfly, by contrast, explodes into life from the first page with an epic siege (one of two - yes, two - sieges in the novel) as the Wasp Empire clashes with the ant-kinden city-state of Tark. Around this brutal storyline Tchaikovsky skilfully weaves a number of sub-plots that carry on the stories of characters from the first novel, as well as introducing a number of new faces. Make no mistake, this is a truly epic story that combines hard-edged action with subtle webs-within-webs of politics, and Tchaikovsky deserves serious credit for the way he manages to juggle the respective story lines. The pacing is pleasingly fast throughout, with not a dull moment to be had.

Characterisation (which arguably was a little hit and miss in Empire) is cranked up several notches in Dragonfly. The novel continues the stories of the main protagonists from the first book, and it's good to see them develop more fully this time around. Stenwold's struggle with the responsibility piled on him is intriguing to watch unfold, but I was most impressed with Totho's development. He really does undergo some serious changes, and the struggle he faces as his old and new worlds collide is excellently handled. Cheerwell - one of my least favourite characters from the first novel - is thankfully largely sidelined this time around, though no doubt we'll see more of her in the next book, Blood of the Mantis.

There's plenty of new faces as well: Drephos the Imperial auxiliary-artificer is superbly creepy and unpredictable, as is Uctebri. As usual, new characters means new insect kinden, and as always it's exciting when new races make an appearance (there are a couple of very cool new ones, but I won't spoil the surprise!). The leader of the spider contingent (can't recall his name!) is also nicely drawn, as are the spiders as a whole - hopefully we'll see a lot more of them, as their society (and the inherent politics) appear very interesting indeed. Once again - with both old and new characters - Tchaikovsky develops complex, believable relationships that evolve over the course of the novel (the relationship between Stenwold and Arianna is a very good example). The strong military aspect of Dragonfly means that we get to see the true impact and horror of war on various people, and this is a theme that Tchaikovsky uses to maximum effect.

Having looked at my criticisms of Empire, I'm pleased to see that all have been rectified in Dragonfly. The prose is a more dynamic and visceral, and the novel itself - due to the skillful plotting - is more cohesive as a whole.

Verdict: With Dragonfly Falling, Adrian Tchaikovsky has basically taken everything that made Empire in Black and Gold so enjoyable, added some new characters and story lines to the mix, and then turned it all up to eleven. The result is a gripping novel that is easily one of the best epic fantasies I've read in some time, and I'm now feverishly anticipating the third instalment, Blood of the Mantis. Highly recommended.
Posted by James at 13:45

Awesome, this one is in my to read pile. You've convinced me to move it to the top. Right after I finish Mistborn.

I also really enjoyed Empire, and agree with what you said in its review. However, I wasn't quite as convinced with the second installment.

I did enjoy the book overall, but in parts I thought it was a little drawnout. It is a really long book, and I think it could have built up a bit more momentum had it been edited down slightly.

Having said that, I wouldn't like to put anyone off, the world which the author createds is great, and held my interest - I am definately going to buy the final in the series!