Cover art and blurb for 'Farlander' by Col Buchanan 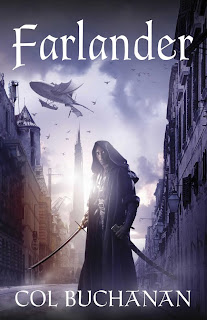 Saw the artwork for this over at Walker of Worlds, so in the friendly spirit of the blogosphere I decided to steal it and post it here, along with the blurb:

"The Heart of the World is a land in strife. For fifty years the Holy Empire of Mann, an empire and religion born from a nihilistic urban cult, has been conquering nation after nation. Their leader, Holy Matriarch Sasheen, ruthlessly maintains control through her Diplomats, priests trained as subtle predators.

The Mercian Free Ports are the only confederacy yet to fall. Their only land link to the southern continent, a long and narrow isthmus, is protected by the city of Bar-Khos. For ten years now, the great southern walls of Bar-Khos have been besieged by the Imperial Fourth Army. Ash is a member of an elite group of assassins, the R shun - who offer protection through the threat of vendetta.

Forced by his ailing health to take on an apprentice, he chooses Nico, a young man living in the besieged city of Bar-Khos. At the time, Nico is hungry, desperate, and alone in a city that finds itself teetering on the brink. When the Holy Matriarch's son deliberately murders a woman under the protection of the R shun; he forces the sect to seek his life in retribution.

As Ash and his young apprentice set out to fulfil the R shun orders - their journey takes them into the heart of the conflict between the Empire and the Free Ports ...into bloodshed and death."

Nice cover, reminds me of the new Erikson ones. The blurb too is Erikson-esque as well. Doesn't seem to promise anything particularly fresh, but it sounds decent enough. Judging by Tor editor Julie Crisp's comments on her Twitter page (sigh...why is everything on Twitter these days...) she's pretty excited by this debut novel.

Farlander is set for release in hardback from Tor on 5 March 2010.

Thanks for the blurb James! For some reason I couldn't find it when I went looking the other day, but glad to see it and that it confirms it's one I need to read :)

Name reminds me of Gemmell's Waylander...