Cover art for MMPB version of Nights of Villjamur

Very different from the hardback version: 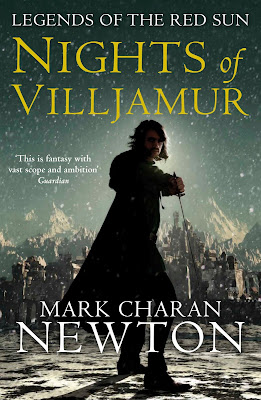 The inclusion of a figure is almost inevitable; it's pretty much a prerequisite for a paperback cover (the sole intention of which is usually to shift as many copies of the book as possible, and screw anything else).

That said, I quite like this cover - it's certainly an improvement on the rough version I saw some time ago. I like the colours, and the fact that Randur is cast in shadow. I was initially a little concerned by the cityscape background, as on the rough version it was quite blocky, but it's been tidied up nicely here.

The representation of Randur doesn't match the picture I formed of him in my own mind (too much Aragorn and not enough dandy, for me) but of course this is personal preference. I'm not sure I'm a fan of the photo-realism gig that artists seem keen on these days, but this is a pretty decent example I guess.

Still, the hardback version is far superior in my own opinion.

This paperback version will be released in June 2010, alongside the next book in the Legends of the Red Sun sequence, City of Ruin.

I have to be completely honest and say that I don't like this cover. It is too much focused on a sole character and considering that the novel shifts through different and important points of view, the choice is not good. I like the city behind the central figure, but I find the hardback cover more representative for the novel and captures the atmosphere far more better.
Also my image of Randur is not matched by this one. This character looks too much like a rogue when Randur has more care for his personal appearance.

I fully agree with Mihai.

I loathe character covers - they never seem to generate the sense of wonder that a good landscape or cityscape does. Take Edward Miller's cover for Perdido Street Station as an example of how good a cover can be:

Disagree entirely Chris..your comment was so broad it is pretty remarkable.So your saying Robert E Howard covers should show a landscape although the story is entirely based aroundn a barbarian and his nadventures and packed with action. We arent all female readers out there we dont need everything dumbed down to attract our attention.

Mmmm... yes my comment was perhaps overly broad, though it's true I simply do not like character covers, but your comment about dumbing down is strange as that was precisely my point.. the focus of the paperback cover on the Randur character suggests a dumbing down when compared to the far more allusive hardback cover. The hardback gives the mind space to create it's own image, the paperback tries to fix an image - and prevents the reader from creating their own picture of Randur.
As for your comments on females (I am male by the way).. I will treat that with the contempt such sexism and gender stereotyping deserves.