I had an excellent time yesterday at the Alt. Fiction - Other Worlds event, which was held in conjunction with Tor UK, and was basically a small-scale convention with a mixture of workshops, panels and book signing action. 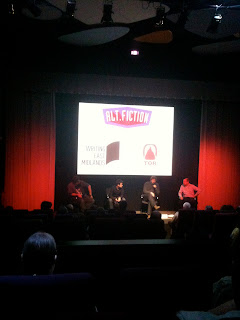 The four Tor authors in attendance were Peter F. Hamilton, Adrian Tchaikovsky, Mark Charan Newton and Tony Ballantyne, and the first panel of the day was one they all took part in (above), in which they touched on a variety of topics: the differences between the fantasy and SF genres, the changing nature and importance of cover art, and the subject that is still rumbling on...the supposed death of SF. "Total rubbish" was Peter F. Hamilton's response to that. But it was all very good-natured, and in fact it was enjoyable to see Peter and Mark sparring on the issue. 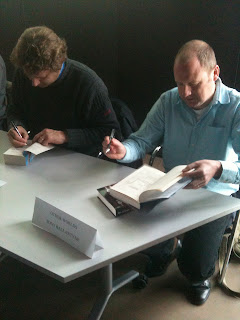 Peter and Tony engaged in book signing duties
After a short break, the crowd split into two, some heading to the SF panel with Peter and Tony, others to the fantasy panel with Adrian and Mark. I attended the latter, which proved to be an entertaining, lively discussion on various aspects of the genre, touching on various subjects such as the use of religion in fantasy and the merits (and problems with) magic systems.

Following the panels, everyone reconvened for a book signing session and a raffle (the first prize of which was a year's supply of Tor books - not too shabby). 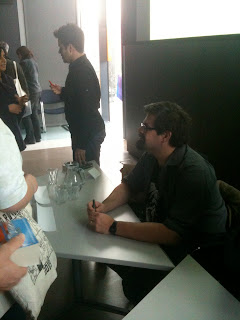 Mark and Adrian chatting to readers

No convention is complete of course without after-hours boozing, so I joined the lovely Tor ladies, the four authors, and some other like-minded folk, for a few drinks in a nearby bar. Beer and wine was consumed, geek talk was had. Happy times. This was then followed by a dash to the station, upon which Adrian Tchaikovsky and myself realised we both had a bit of a wait until our trains, so we relocated to a pub and talked books and video games until it was time for me to run for my train.
So, a really fun day. Many thanks to Chloe and Julie from Tor and the folks from Alt. Fiction for pulling the whole thing together, and to Peter, Adrian, Mark and Tony for being good sports and putting up with us fans. It was terrific to catch up with plenty of folk from the online genre scene too: Adrian Faulkner, Steve Aryan, Mark Yon and Mark Chitty.
As if that all wasn't enough, I found a copy of Mieville's King Rat in my swag bag, and a teaser book full of excerpts from Tor books - including Mieville's Embassytown.
Win.
Posted by James at 10:12