Scott Lynch reveals reason for the delay with The Republic of Thieves... 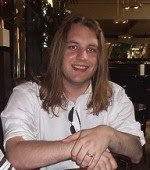 ...and it's probably not what everyone assumed. There's been all kinds of rumours and gossip flying about regarding the nature of the delay, but all of it was wide of the mark.

To quote Lynch himself:

"I have occasionally taken deliberate breaks from the internet-at-large, but my silence of the past few months has not been by choice.

These attacks worsened sharply during the Season of the Long Flu last fall and reached the point where they interfered with nearly everything I tried to do, making it impossible to write, communicate, and sometimes even think straight. It has been a long, sore trial for everyone around me and it ain't over yet. I do not have a firm grip on precisely what causes the damn things, though they are related to my work, my reading, my writing, and my intellectual life. They are very much an ongoing problem.

So, for the first time in my life, I am in therapy."

It takes courage to admit you have a problem, and even more courage to make it public - I should know, as I had a similar experience to Lynch a few years back, so I can totally appreciate what a struggle it can be. Kudos to him for being open about it and I for one wish him all the best.

Check out the rest of his entry here.
Posted by James at 13:25

Keep up the good fight.

In fairness, Lynch only states that his online presence, his blogging and his serialised novel have been affected by his depression. Whilst we can infer this also had an impact on REPUBLIC OF THIEVES (and it probably did, to some extent), that's not been made 100% clear. In particular, he points out that the problems only got really bad last autumn when he disappeared from the Internet, by which time RoT was already in a state of some completion (and has now been turned in).

Best wishes to Scott, and I hope that he overcomes his problems.

Adam - good point. Though I still reckon that ROT was affected to some extent. And it certainly explains his absence from the interwebs.

Oh no! *in voice of gay dude from Family Guy*

Maybe ROT will be nice and dark? Something good has to come out of this... Fingers crossed he manages to manage it.