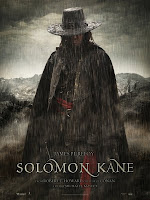 Really enjoyed this film. I knew next to nothing about the actual character of Solomon Kane beyond what Mark Chadbourn described in the piece he wrote for me a while back, but the film seems to do the character justice.

James Purefoy turns in a suitably brooding performance as Kane, and certainly looks the part when he's got his cloak and slouched hat on. The combat sequences are handled well, but the real strength of the film is the atmosphere: bleak, oppressive and unforgiving. The scenery proves invaluable in helping to create this atmosphere - the desolate, snow-bound woods and burnt-out settlements create a real edge of tension. The supernatural elements are also portrayed in a convincing manner - my favourite scene of the entire film involved Kane, an abandoned church, a half-mad priest, a trapdoor, and...well, go see for yourself. It was pretty chilling.

The film's main drawback is that the overall plot is rather linear and predictable. You'll also work out the identity of the masked lieutenant both too early and too easily (plus it's a cliché I could have done without).

Flaws aside though, Solomon Kane is a very enjoyable romp: swordfights, demons, bleak landscapes and a bleaker atmosphere - what's not to like? Even better, there's (hopefully) more to come - this is allegedly the first film in a planned trilogy, with the ending certainly suggesting future instalments. Hopefully that will be the case.

Check out the trailer here.
Posted by James at 13:36

Do yourself a favour and read the stories; best in the Del Rey The Savage Tales of Solomon Kane edition. And then get the Kull, Bran Mak Morn, and the three Conan volumes as well. :)

The movie makes up a backstory for Kane that has only a very thin basis in the stories, and a Catholic monastery in Tudor England is a bit weird, too. But the Solomon Kane film seems to be a better take on a Howard hero than the second Conan and that abysmal Kull movies. I haven't seen it yet but I will as soon as I can find an undubbed version.

Here's the take of a Howard scholar on the film.

"Really enjoyed this film. I knew next to nothing about the actual character of Solomon Kane beyond what Mark Chadbourn described in the piece he wrote for me a while back, but the film seems to do the character justice. "

Mark's description doesn't really describe Howard's Kane sufficiently at all, I'm afraid. I don't know what kind of "villain" he's talking about Kane being, unless he thinks Tony Soprano's a "hero."

I'd do what Gabriele suggests (Hey Gabriele!) and get yourself that Del Rey. If you like it, get some more.