Artwork for 'Corvus' and 'The Kings of Morning' by Paul Kearney

I very much enjoyed Paul Kearney's The Ten Thousand, so figured I'd post the artwork for the upcoming books in the same series: Corvus and The Kings of the Morning. I'm glad that Paul decided to pen more novels in the world of the Macht, as I got the feeling that The Ten Thousand only scratched the surface of this exotic place.

Here's the cover for Corvus. 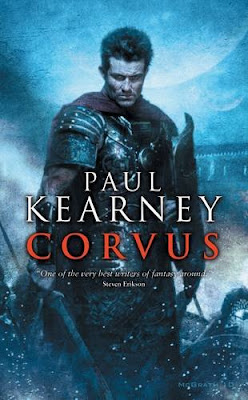 And the cover for The Kings of Morning. 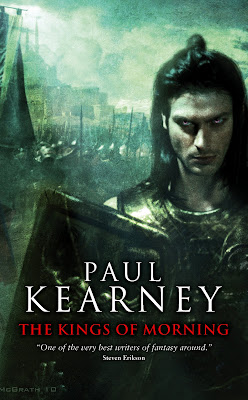 I like these covers a lot, they have a rather historical feel to them, and the colour tones are suitably moody. They're also in keeping with the style of the first book, which is obviously good for continuity.

Corvus is due out in October 2010. There's no listing on Amazon yet for The Kings of Morning, though the walking storehouse of genre knowledge that is Werthead has suggested it will follow in July 2011 (thanks also to Wert for the heads-up about the Kings of Morning artwork).

Actually, while I think of it, Wert has got a good write-up on the other Kearney releases that are currently in the works (Kearney's got a lot of stuff currently on the go, which is great news for the genre, as Paul doesn't always get the exposure he deserves).
Posted by James at 07:30

John Stack already wrote a historical saga about corvus - the device Romans used on their galleys to beat Carthaginians at sea. Stack's novels are THE SHIP OF ROME and THE CAPTAIN OF ROME.