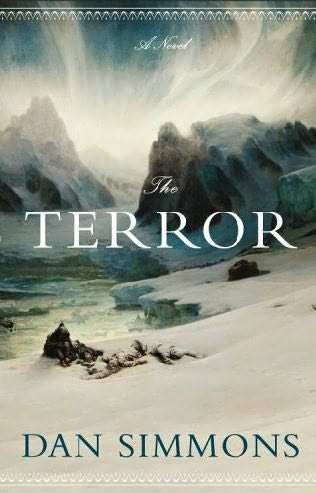 Ever since the doomed Franklin expedition set sail in 1845 and was subsequently never heard of again, a whole wealth of music and literature has been written in tribute to the ill-fated voyage, not to mentioned the odd television documentary.

It's easy to see where the interest comes from: two ships and 134 men disappearing into the frozen wastes of the arctic, leaving no real clue as to their fate. Subsequent searches have yielded a number of trinkets and artifacts, including human bones that show signs of cannibalism and scurvy.

There was always a fantastic story to be told here. Dan Simmons clearly thought so, as the fate of the Franklin expedition forms the basis of The Terror. Except that Simmons throws another ingredient into the mix - an unknown predator that lurks in the semi-permanent darkness beyond the two ice-bound ships, a predator that just happens to enjoy snacking on human flesh...

It is often said that the best ideas are the simple ones, and the premise of The Terror is both. The two Royal Navy Ships Erebus and Terror have become stuck in the ice deep in the arctic circle, and have been for almost two years. The conditions are horrendous, supplies are slowly running out and the crew are wasting away. On top of that, you've got the aforementioned predator lurking out on the ice. The scene is therefore set for both a riveting story and also for an interesting look at how mankind can survive such atrocious conditions.

Simmons wastes no time in jumping into the thick of the action; the first chapter begins the story long after the two ships have already become frozen in and the crews are already aware of the 'thing on the ice' as they call it. It also happens to be one of the best openings to a novel I've read in some time. While subsequent chapters do leap about a bit in the time line, after a while the story settles down and the chapters follow in chronological order.

Simmons' prose is impressive; clear and concise with barely a word wasted, he proves masterfully adept at re-creating the harrowing atmosphere of the men's icy surroundings. His descriptive writing is wonderfully evocative; you can almost feel the chill of the air and hear the screaming of the ice as it crushes the ships. In addition he manages to instill a real sense of claustrophobia and fear.

Despite the large cast, Simmons has opted to focus mainly on a small handful of characters. Some chapters are written in the standard third-person, though Simmons does deviate from the norm. The chapters written from Dr Goodsir's perspective are written in the form of Dr Goodsir's diary (and thus in the first-person) while some of the chapters focusing on Captain Crozier are written in the present tense. The latter in particular works very effectively, adding a sense of urgency and tension to the proceedings. Simmons really manages to get under the skin of his characters, leading to a number of touching scenes (as well as some horrific episodes) as the plot develops.

The story itself is the real strength of the novel. Harrowing, unpredictable and utterly engrossing, the horror of it all is increased when you remember that it's all based on a true story (minus the scary monster, of course). What the men go through is dreadful beyond belief, and seeing the main characters slowly unravel is fascinating, as are the crews' desperate attempts to stay alive. As the situation grows unbearable (well, more unbearable than it already was) you start to realise that the danger is not the creature on the ice, or even the weather conditions, but the darkness that lurks in the human soul.

With such a famous historical event, it was important that Simmons didn't let the addition of the predator overshadow the grim reality of the men involved. It would have been easy for him to simply turn the story into a slasher horror, but fortunately Simmons avoids this. The monster is terrifying, but the real enemy is the environment and - later - the men themselves. The predator just adds an extra level of tension, which works extremely well. The title of the novel can therefore relate to a number of things - the ship Terror, the creature on the ice, the terror of the men's descent into desperation, among others.

Having been riveted for over 800 pages, I was disappointed to find that the last stage of the book didn't match the excellence of the rest of it. The tension in these final chapters - with a couple of notable exceptions - just seemed to trail off a little, and the rhythm of the novel felt interrupted. The change in emphasis made these chapters feel almost like a separate story that had been bolted on to the rest of the novel.

Still, the lukewarm final chapters don't spoil what is a gripping novel. Well-researched and brilliantly written, The Terror is a harrowing tale which is masterfully told.

Well,well...a brilliant review James. I believe Trin is reviewing Terror at our blog atm (it'll come up today I think) and she is giving it a clear 5/5. She said she doesn't know what else could one expect from a book. I see you agree (almost to the point).

Thanks, Thrinidir! I checked out Trin's review and agree with her assessment! Definitely a fantastic novel.