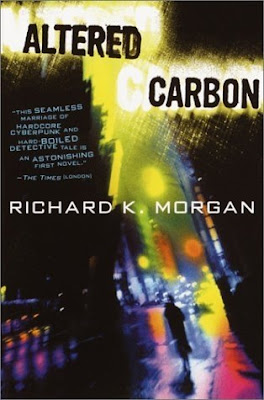 Altered Carbon is one of those novels that is like a bad penny - it just keeps surfacing in online conversations and recommendation lists. The novel itself won the Philip K. Dick award for 'Best Novel' in 2003 and was widely hailed as an excellent science-fiction debut by an exciting new author. It wasn't long before the film rights were picked up, with a big-screen adaption allegedly set to surface in 2009, directed by James McTeigue.

Naturally, when I decided it was time that I read some decent sci-fi, I turned to Altered Carbon to see what had inspired all the buzz in the first place.

The novel itself - set four or five centuries in the future - is told entirely in the first-person from the perspective of Takeshi Kovacs, who is a former UN 'envoy' (an agent from an elite military unit).

Kovacs is sent to Earth and is hired to investigate the murder of Laurens Bancroft, a so-called 'Meth' (after Methuselah, as 'Meths' are humans that have lived for hundreds of years). The investigation quickly becomes very murky and tangled, with Kovacs being forced to rub shoulders with the pimps and criminals of Bay City. The closer he gets to the truth, the more people there are that want him dead. As the stakes get higher and higher, Kovacs is forced to rely on his special military training in order to survive.

The plot is greatly enhanced by the distopian vision of Earth that Morgan has created. In this future world, humanity has achieved some sort of immortality via the use of highly sophisticated technology. The personality of an individual can be stored digitally on a device called a cortical stack, which can be removed from the body in the event of death. The stored person can then be 'uploaded' into a new body (referred to as 'sleeves').

Though they will retain their memory, intelligence and personality, the individual will be forced to adjust to the demands and drawbacks of their new sleeve. The quality of the sleeve varies, depending largely on the wealth of the person in question. The rich are able to afford young, healthy bodies (some even change sleeves on a bi-monthly basis) while poorer individuals are stuck with sleeves of a lesser quality (they might find their new sleeve used to belong to someone who smoked, meaning they have to endure nicotine cravings).

This makes for an interesting slant on the murder investigation plot. The victim in Kovacs' investigation - Laurens Bancroft - was killed, but was re-sleeved a short time later. Kovacs is therefore investigating the murder of a man that is actually still alive (the reasons why Bancroft can't remember who killed him are made clear in the novel, so I won't go into them here). This is a particularly interesting twist on the usual murder plot, and further twists are added by the fact that the technology available means characters that die in one scene may re-appear later on...and not always in the same body. This adds a totally new dynamic to the story, which Morgan takes full advantage of.

The use of technology in Altered Carbon gives rise to a number of ethical and philosophical questions, which Morgan does well to explore without encumbering the plot. In fact, one theme that crops up is the objection that Catholics have towards the re-sleeving process, and this goes on to become a fundamental part of the plot. The actual pacing and structure of the plot is first class; it's like being strapped to a rollercoaster that only ever gets faster. The novel starts in explosive fashion and barely lets up from then onwards.

The characterisation is equally impressive, particularly when you consider that this is Morgan's debut novel. The protagonist, Kovacs, is a character of considerable depth. Capable of both brutal violence and surprising tenderness, it's interesting to see how he struggles to adapt to the unfamiliar sleeve he finds himself in and how his relationships with other major characters develop, Ortega in particular. Ortega herself is a finely drawn character, and it's fascinating how she struggles to deal with the fact that Kovacs is wearing the sleeve of someone she is closely connected to.

One of the aspects of Altered Carbon I liked the most was the writing itself. Morgan's stylish, noir prose is perfect for this sort of story and characters. The action scenes are powerful and exhilarating, yet Morgan also displays a more subtle, atmospheric side to his writing which he uses to excellent effect to flesh out the world. My favourite sequence in the entire novel is a segment where Kovacs goes out on a drunken, drugged-up bender - the spaced out, trippy prose is brilliant. Morgan's also particularly skilled at exposition, always managing to provide the necessary details without making the story clunky (something that many popular genre authors are pretty useless at).

I didn't have many complaints. As I said, Morgan is adept at exposition, though arguably almost too good. Certain things are referred to early on and later become important to the plot, but because they'd been mentioned in such an off-hand fashion I did struggle to remember the finer details of them. Once or twice I did find myself flicking back, trying to find where something was mentioned, or who a particular person was. Still, a minor complaint and possibly my own fault for having a crap short-term memory. Some readers might find the ending a bit abrupt and bittersweet, though I thought it was fine.

What Altered Carbon essentially boils down to is a tough, gritty detective storyline fused with original sci-fi elements that combine to make an enthralling, addictive novel. The superior prose, twisting plot and wonderfully human characters make this a book that's very hard to put down. It's a sci-fi novel for people that don't normally read sci-fi, and a damned good one at that.

Awesome, I've been looking for a novel that did the "immortality" thing right and it sounds like this is it. I rarely jump into SF but it sounds like AC will be well worth it.

Great review of a great book. Altered Carbon is one of my favorites!

Yeah it's a brilliant novel, the two sequels are equally as good, if not better - he really takes the story up a notch.

Shame his fantasy novel wasn't quite as good.

TD: Yeah, the 'immortal' aspect makes for an interesting novel and world. I use the inverted commas though, because it's immortality at a price - and not all can afford that price. I rarely read SF but this was well worth picking up.

Dave: Thanks, glad you enjoyed the review!

Jebus: Thanks for the recs, I am indeed going to pick up the sequels at some point. And yes, The Steel Remains was short of the quality of Altered Carbon. Still pretty good though.

I read this a few weeks ago myself, and although I can see where all the praise for his work comes from it wasn't quite what I expected. I thought there might be a little more action, but as a sci-fi thriller it hit all the right notes. I'll be trying the sequels in the new year!

I'm disappointed that the minigun-equipped sentient hotel sidekick didn't have more to do :-)

Broken Angels is in many ways better than AC, and I'm reading the last book in the trilogy, Woken Furies, right now. It may even be better and has a brilliant twist on the resleeving process that I really should have seen coming.

Good stuff, I'm adding this to my reading list since it seems a bit similar, from what I'm told, to the David Gunn stuff I have been reading.