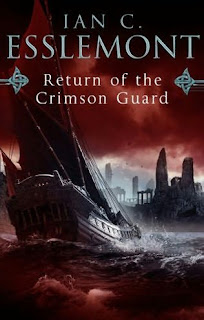 John Jarrold has concluded a four-book World rights deal for Canadian fantasy writer Ian Cameron Esslemont with Simon Taylor of Transworld Publishers in London for a strong five-figure sum in pounds sterling. The first book, called STONEWIELDER, is due for delivery in September 2009, and publication in 2010.

Esslemont created the Malaz world with Steven Erikson, and joined his co-creator in writing novels set in the world with NIGHT OF KNIVES, followed by RETURN OF THE CRIMSON GUARD. Both of these books have been published in the UK by Transworld and are being published elsewhere in the world.

‘I’m really delighted about this deal,’ said John Jarrold. ‘Simon Taylor and Transworld have shown their long-term belief in Cam Esslemont, at a time when much of the publishing world is wringing its hands over its shorter-term problems.’
Posted by James at 17:08

John is a very busy man!

Apparently so - he seems to have done a lot of deals this year!