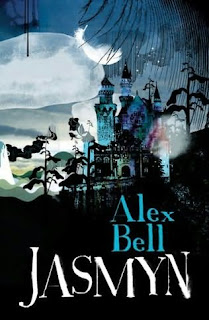 While I had a number of issues with Alex Bell's debut offering, The Ninth Circle, I did think it showed some promise - enough to make me pick up her new novel, Jasmyn, to see whether the negative aspects of the first book had been improved on.

I was disappointed to find that all of the problems and flaws that marred the first novel are all present and correct in Jasmyn. Worse, they're even more prominent and intrusive than the first time around. The result is a book that becomes more infuriating and ridiculous with each chapter.

One day, without warning, Jasmyn's husband died of an aneurysm. Since then, everything has been different. Wrapped up in her grief, Jasmyn is trapped in a world without colour, without flavour - without Liam. But even through the haze of misery she begins to notice strange events. Even with Liam gone, things are not as they should be, and eventually Jasmyn begins to explore the mysteries that have sprung up after her husband's death . . . and follow their trail back into the events of his life. But the mysteries are deeper than Jasmyn expects, and are leading her in unexpected directions - into fairytales filled with swans, castles and bones; into a tale of a murder committed by a lake and a vicious battle between brothers; into a story of a lost past, and a stolen love. She's entering a magical story. Jasmyn's story.

There's so much wrong with this novel that I hardly know where to start.

The characterisation is probably the biggest offender. Jasmyn herself is actually a well-realised protagonist, and for the first third of the novel Bell does a decent job of fleshing her out and inspiring the reader's sympathy for her. As the novel progressed, I found my sympathy in increasingly short supply, until it vanished altogether and I started hoping that the (unintentionally) comical villain would actually put a bullet in her brain to put her out of her misery.

The main problem is Jasmyn's relationship with Ben, who she doesn't like but really wants to. Ben treats her like dirt, so Jasmyn gets angry with him. Then he is a little more nice to her, and she decides that he's quite pleasant after all. Then treats her like dirt again, and she thinks he's horrible again. This leads to endless monologues - How could I have thought Ben could ever be nice? Liam told me not to trust him! How could I be so stupid! I really thought I'd seen a different side of him, and, and, and...he was so rude to me! Yawn. This sort of monologue appears over and over again. By the end of the novel I was convinced that Jasmyn must have been a robot or something, because she seemed utterly incapable of actually learning from her past experiences.

The other characters are a pretty dull bunch. Jaxon, the antagonist of the piece, comes across as an shallow, incompetent James Bond villain who - despite apparently being an excellent marksman - somehow manages to miss a shot at point-blank range. Ben is - with good reason - a moody, irritable bastard, but his constant pattern of irritation/lash-out/apologise/irritation/lash-out/apologise becomes tedious (though not as tedious as Jasmyn's reaction to this treatment).

The characters' dull personalities pale when compared to their actions and motivations, some of which are so ludicrous that they seriously undermine the book's credibility. For example, the notion that a scientist would readily accept someone's claim of the existence of a magic swan - without any proof - and accompany said person on a trip to catch one, is utterly ridiculous. There are frequent instances like the one above that made me want to throw the book into a corner. I don't know about you, but if five black, dead swans fell from the sky at a funeral, I wouldn't just say "Oh, how strange" and then waltz off to the car without giving it any more thought (which is what happens).

The plot is no better - strip away the Bavarian folklore element (which frustratingly isn't used nearly as well as it could have been) and it essentially boils down to a weak thriller. The central premise gives the novel a decent foundation, but the subsequent plot veers from monotonous to ridiculous, with a generous side-helping of deus ex machina. In short, it has more holes than a Swiss cheese that's been shot by a firing squad. For example, after being told time and time again that the item our heroine is hunting for would have been hidden somewhere within easy reach but out of the public eye, the item turns out to be concealed in a location that is full of tourists and not accessible between 5 pm and 10 am. Hmm.

Another problem is Bell's insistence on using certain locations that, while being atmospheric, are totally illogical in relation to the plot - the artifact's location is a good example of this, as it was clearly chosen because of the possibilities that it offered the story, rather than because it made any sort of sense. The most glaring example is the inclusion of the Ice Palace, which totally defies logic. The paper-thin explanations Bell offers to explain the inclusion of these settings completely fails to convince.

There's not much positive to say about the prose. It's passable, nothing more. Despite the whimsical, fairytale settings in the novel, there's a distinct lack of atmosphere in the writing and the descriptive prose is pretty underwhelming. The book is crying out for more of a lyrical flourish, some haunting, dreamy language...but it just doesn't happen. Still, at least Bell has reigned in her obsessive use of italics.

Positive elements are thin on the ground. I suppose Bell deserves some credit in that - despite all its faults - I kept reading the novel because I wanted to find out the reason for Liam and Ben's fall-out (although the eventual revelation was another tick in the column marked 'unconvincing'). Other than that, well...the cover's quite nice.

Verdict: I hoped for good things from Jasmyn, but was sorely disappointed and sadly this is easily the worst book I've read this year. Somewhere in this unconvincing mishmash is a decent story - I don't doubt that Bell has got some interesting ideas. But there was just far too much wrong with this novel for me to enjoy it - weak and unconvincing characters, a plot that is simply unbelievable (for the wrong reasons) and constant dull monologues. Put simply, it's a few hours of my life I won't get back.
Posted by James at 14:12

Thanks for the review. Now I won't have to read it.

The cover looks like it belongs on a video game, too...

Bummer. I also had issues with The Ninth Circle, but the blurb from Jasmyn sounded more my thing so I was really looking forward to reading it. Now I'm not sure whether to bother.

I like to read several reviews of a book before I build up my mind whether to add a book to my list or not.

I read your excellent review which is just the opposite to Liviu's review and The Book Smugglers review.
It seems this is really a love or hate book.
Based on your review I decided that this is not the kind of novel I want to read.

I agree that Jasmyn is a book that will entrance you or not but I would say that if you did not love Ninth Circle you will most likely not like this one since it has at its core the same theme, though with fantasy overtones rather than religious ones.

For me it was one my most expected books of 09 and I bought it the moment it was released - for some reason a promised arc did not arrive - and I just loved it, read it 3 times and will read it more later; yes, a fairy tale to some extent, but so what, no more than most sff...

As with all sff it's up to the reader what he or she can suspend disbelief for so i would not quibble with the points above, the book works or not and if it works it will flow for you, if not you will discover flaws everywhere, but that is true for any book anyway

@Amysanderson - well, opinions are subjective. You may read it and like it more than I did. But for my money, TNC is a better book (even though it also has its flaws).

@ediFanoB - thanks for the links, I'll check those reviews out.

@gav - have you read it? Don't remember seeing a review on nextread...

@Liviu - "you will discover flaws everywhere, but that is true for any book anyway" - maybe it is, but for a lot of books the flaws are minor and don't detract from the novel too much. With Jasmyn, the flaws are so significant that they seriously undermined the novel's credibility for me, and that meant I couldn't enjoy it.

"maybe it is, but for a lot of books the flaws are minor and don't detract from the novel too much. With Jasmyn, the flaws are so significant that they seriously undermined the novel's credibility for me, and that meant I couldn't enjoy it."

you touched upon one thing that I rarely see talked about - what is a "minor flaw, vs a major flaw"

for me it comes down to suspension of disbelief and what expectations you have - eg I read Jasmyn as a fairy tale for adults the way I read Memoirs of a Master Forger last year and I was not bothered by what you pointed out in the review;