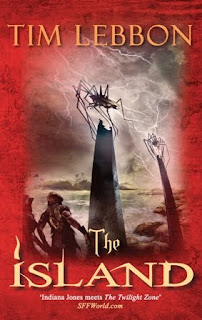 "Kel Boon thinks he has managed to escape his past as an agent in the secret organization the Core, protecting the blissfully unaware Noreelans from the threat of the lizard-like Strangers - creatures from beyond the known world capable of untold destruction. In the sleepy fishing village of Pavmouth Breaks, Kel has become the woodcarver, leaving fighting behind and forming a tentative relationship with trainee witch Namior. But a storm is brewing and at its center the witches sense something dark, and deadly. What follows in the wake of the storm threatens the Noreelans' very way of life, forcing them to face the fact that life exists beyond the shores of Noreela, and not all of it is friendly. With the people and land he loves in terrible danger, Kel quickly realizes that he cannot escape his past, or his destiny."

With The Island, Tim Lebbon has established himself in my mind as a good writer that isn't afraid to try something a little different. His previous effort, Fallen, was an enjoyable adventure romp with some excellent characterisation and a healthy dose of mystery. More than that, it was a good example of how Lebbon approaches familiar storylines from different angles, and conjures up something a little bit different. Fortunately the same is true of The Island - a very different book to Fallen, yet imbued with the same solid characterisation, flowing prose and general freshness.

Kel Boon and Namior Feeron are well-developed protagonists; Lebbon flits with ease from one perspective to the other, building a believable relationship dynamic between the two. Kel's background is skilfully revealed through a series of flashbacks that never halt the momentum of the story, and his character arc peaks nicely as he struggles between his dual loyalties. Namior at first seems little more than an emotional foil for Kel, yet she turns out to have a few secrets of her own. Lebbon works these revelations into the story very well, without them seeming contrived or unrealistic.

Despite the limited geographic scope of the novel (90% of the story takes place in the fishing village of Pavmouth Breaks and its immediate environs) Lebbon manages to make the setting both intriguing and dynamic enough for the story's requirements. Noreela is proving to be an interesting place, and as in Fallen Lebbon reveals little touches here and there that make the world all the more detailed (my favourite was the fish that can be played like a pipe!).

The only real criticism I would level at The Island is that I feel - like Fallen - the ending is a little underwhelming; there's an aspect to the resolution of the plot that just felt a little cheap to me (not to mention rather unlikely). But this flaw aside, Lebbon deserves credit for constructing a well-constructed plot that unfolds at an even pace, with a really fresh feel to it (I personally can't recall reading anything particularly similar) that mixes suspense with emotional gravitas and some good old-fashioned brawling. It's always nice to read a novel where I don't have the faintest idea how it's all going to end.

Lebbon's prose is another strong point - perhaps not as lyrical here as it was at times in Fallen, but as always it's crisp and fluid, striking a perfect balance between exposition, description and action.

Verdict: An enjoyable addition to the 'Noreela' series, featuring a world that becomes more intriguing with each novel. The Island is a fast, entertaining read that makes a good argument for why you should be reading Tim Lebbon's work.