US deal for Jasper Kent 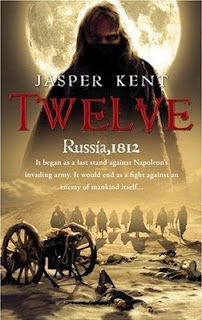 Twelve by Jasper Kent remains one of my favourite reads of the year - a historical fantasy involving vampires that would eat their fluffy namesakes in Twilight for breakfast. The book has been a real success in the UK - according to agent John Jarrold it's the "second-highest-selling trade paperback debut novel right across UK publishing in 2009."

It's now been announced that Kent has signed a two-book deal with Pyr in the US, for the release of Twelve and its sequel Thirteen Years Later.

‘I'm thrilled to be welcoming Jasper Kent into the Pyr fold,’ says editorial director Lou Anders. ‘TWELVE is a magnificent blend of a historical novel and a dark fantasy novel, that could appeal equally to readers both in and out of genre. Jasper is a skilled storyteller, whose compelling prose had me hooked from his opening chapter. The book is "un-put-downable," and I love that he has brought back a real sense of threat and danger to the classic monsters, something that has been lacking with too many vampires lately. I cannot wait to spring this on US readers.’‘

Jasper and I are delighted with this deal, and looking forward to working with Lou and his colleagues,’ said John Jarrold. ‘Pyr is a terrific company, who publish many of my favourite authors, and Lou’s enthusiasm has to be seen to be believed!’

Congratulations to Jasper - I'll be interested to see if the success the book has enjoyed in the UK will be replicated across the Atlantic.

For the record I hated this book by the time I gave up on it.

I got 200 pages in and skimmed further than that. The problem for me was that it lacked any sort of tension or development and just didn't grab me.

I'm saying this more to show that even though there are loads of people that love a book there is always going to be people, like me on this occasion, that don't ;)

The book's not perfect - there are some flaws, for sure. But despite that, I found it absorbing though I'm not entirely sure why. Just something about it...

"Twelve", really a very good novel that appeals out for both the people, in & out of the genre. I loved going through this whole novel, as every page of this novel is quiet interesting. I really loved it.