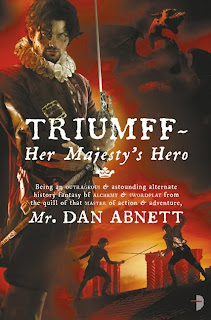 Triumff - Her Majesty's Hero
By Dan Abnett
(Angry Robot, 1 October 2009)
Dan Abnett is a name that is perhaps not familiar to many genre fans, so it may come as a surprise to hear that his Black Library novels set in Games Workshop's Warhmmer 40k universe have sold millions of copies. Media tie-in novels often receive a bad press, but this is often unjust - by all accounts, Abnett's 40k books are some of the best military SF out there. I've been meaning to check his work out for a while, and Triumff conveniently gave me the perfect opportunity - a brand new novel set in an original setting.
"Sir Rupert Triumff. Adventurer. Fighter. Drinker. Saviour? Pratchett goes swashbuckling in the hotly anticipated original fiction debut of the multi-million selling Warhammer star. Triumff is a ribald historical fantasy set in a warped clockwork-powered version of our present day! A new Elizabethan age, not of Elizabeth II but in the style of the original Virgin Queen. Throughout its rollicking pages, Sir Rupert Triumff drinks, dines and duels his way into a new Brass Age of Exploration and Adventure."
It did occur to me that perhaps Triumff wouldn't be the best place to begin my Dan Abnett experience, since the book represents something of a stylistic and creative departure for the author. However my fears were swiftly dispelled - despite spending much of his time writing about a grim, war-torn future, Abnett makes an effortless and laudable transition to spinning a ripping yarn about a future England where the Elizabethan age never ended, and magic sits uncomfortably alongside technology. Abnett deserves credit for this; if I didn't know better, I would have thought he'd been writing this sort of material for his whole career - it's that convincing.
The prose is arguably the novel's strongest point: fluid and atmospheric, and underpinned by a classic, dry British humour that really makes the novel. There are some truly excellent puns, which I won't repeat here. That said, I must admit I didn't find the novel as funny as I hoped - much of the humour brought a smile to my face, but mostly didn't make me laugh (the bath-house scene was a notable exception - if only there were more scenes that made use of that style of humour). At times it did feel like the humour was a little excessive - less is often more.
I did particularly like the nods to contemporary Elizabethan formatting and styles, with the amusing footnotes and chapters with titles such as The Twenty-Fourth Chapter: Never mind the bal-rogs. The way that the story's narrator, one William Beaver Esquire, occasionally tries to ingratiate himself into the novel's important events also provides some entertaining moments.
For a reasonably short novel (331 pages) Abnett manages to throw a surprising number of characters into the mix, the most prominent of course being the gentleman of the title - Sir Rupert Triumff, who comes across as something of a cross between Edmund Blackadder and Errol Flynn (although about 20% in favour of the former, and 80% of the latter). I did find myself wishing that Triumff possessed a sharper, wittier personality. This perceived deficiency unfortunately inflicted the supporting cast as well. Disappointingly, I didn't find any of the characters to be particularly memorable or entertaining, and I did struggle to really care about any of them. While Triumff is of course intended as a tongue-in-cheek humorous romp, this doesn't mean characterisation is any less important - and for me it wasn't quite there. One or two characters - Lord Salisbury, for example - came across as pale reflections of what they could have been.
The plot is surprisingly expansive for a book of both this type and length, and for the most part is constructed well. However, Triumff now and again disappears into the background and becomes something of a spectator in his own story, which is a little odd. The pacing is generally good, although at times is hindered as Abnett goes off in search of another pun that takes too long to materialise. This is a minor complaint though, and it must be said the story builds to a satisfying climax, with a nice twist thrown in for good measure.
Verdict: Something of a mixed bag, in truth - arguably the execution doesn't quite match the vision. The alternative England that Abnett has created is wonderfully drawn and the atmosphere created by the style of the prose is excellent, with some very amusing puns and scenes thrown into the mix. The characterisation though - while serviceable - didn't quite hit the spot for me, the plotting could be construed as a little uneven at times, and the humour (or the attempt at it) sometimes overpowered the narrative. Still, despite its flaws, Triumff is an entertaining read and a solid demonstration of Abnett's talent for diversification and style.
Posted by James at 08:36

Some time ago I read an excerpt of the book. I must admit that it did not work for me. Maybe it was the kind of humor. Maybe it was the main character. Maybe it was the prose. In the end a bit of all.
So I read your great review with interest. It was a kind of mixed bag for you.
For me it is this kind of book which you either like or dislike.
That is not bad. It is a lot better than these books which are neither fish nor fowl.

The humour in Triumff is a very British sort of humour, so it certainly won't be to everyone's taste. But yes, a mixed bag overall. Still, an enjoyable enough read. And plenty of my fellow bloggers liked it a lot more than I did.