This one is next on my reading pile, after I'm done with City of Ruin (which I should finish tomorrow night, so hopefully review will be up before the weekend). 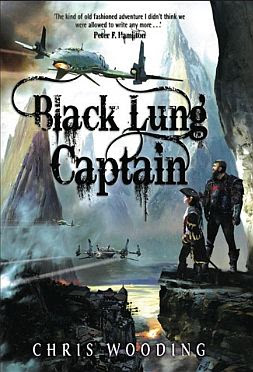 
Darian Frey is down on his luck. He can barely keep his squabbling crew fed and his rickety aircraft in the sky. Even the simplest robberies seem to go wrong. It's getting so a man can't make a dishonest living any more. Enter Captain Grist. He's heard about a crashed aircraft laden with the treasures of a lost civilisation, and he needs Frey's help to get it. There's only one problem. The craft is lying in the trackless heart of a remote island, populated by giant beasts and subhuman monsters. Dangerous, yes. Suicidal, perhaps. Still, Frey's never let common sense get in the way of a fortune before. But there's something other than treasure on board that aircraft. Something that a lot of important people would kill for. And it's going to take all of Frey's considerable skill at lying, cheating and stealing if he wants to get his hands on it . . . Strap yourself in for another tale of adventure and debauchery, pilots and pirates, golems and daemons, double-crosses and double-double-crosses. The crew of the Ketty Jay are back!

Retribution Falls, the first novel in this sequence, was one my top five novels of 2009, and I'm really looking forward to reading Black Lung Captain. Lost treasures, monsters, more rogues than you can shake a stick at...what's not to like?
Posted by James at 00:00

This series looks quite good. I think I'll have to look into getting it.

Now, if someone would just publish Retribution Falls in the US, the rest of us would read it.

I really need to read Retribution Falls. Along with everything else. Someone add some more hours to the day, please?

Daniel - Ret Falls is coming to US in October 2011, published by Spectra. And The Black Lung Captain comes out the following month. Or you can just get it from The Book Depository before then. Free shipping to the US ;)