Well, it was billed as 'Three of the Best' and it certainly was. All in all, it was a terrific evening of GENRE GOODNESS.

Here's me with China Miéville: 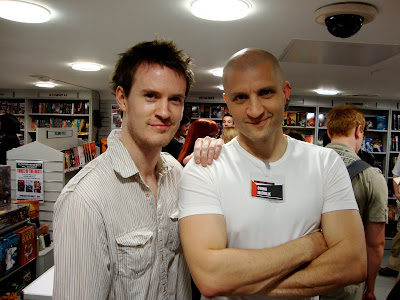 Before the signing I was offering odds of 4-1 on twitter that I would kiss China's nice, shiny head, though was advised by Amanda that the chances of that happening were in fact evens. Thankfully I managed to contain my excitement when I met the man himself, and even managed to have a reasonably intelligent conversation. Plus I gave China my 'business card', which no doubt he has framed and hung above his bed.

Here are some other photos of the event, courtesy of the lovely Chloe from Pan Mac, which I've cunningly STOLEN from the Pan Mac Flickr page. 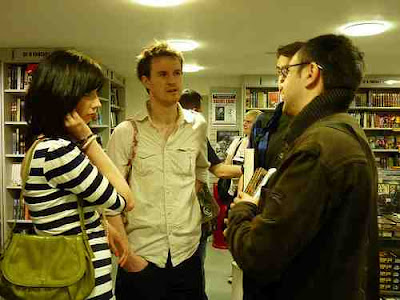 Me regaling Jason from Kamvision and a lovely chap called Alex with witty asides, while Michelle, my chaperone and bodyguard, looks on. 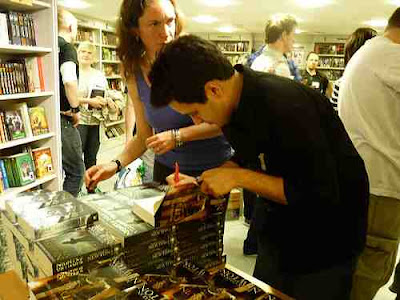 This man grows his own vegetables, you know. He's the man you need to talk to if you want to know what a marrow is. He also happens to write rather good fantasy novels. His handwriting is crap though. 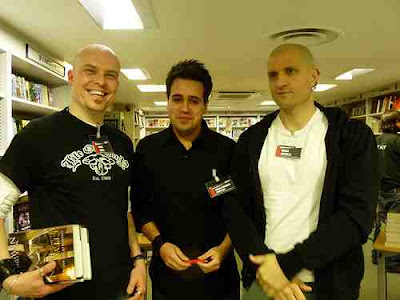 Adam Nevill, Mark 'Sharon' Newton and China Miéville. Fine writers all. I'd love to see a scrap between Adam and China, they're both big and buff. 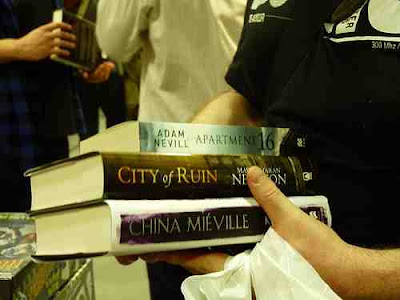 Three of the best, indeed.
In all seriousness though, it was a really good event. Very informal, so the three authors mingled freely with fans and signed whatever books they'd bought/blagged/stolen (I dragged my heavy Kraken proof all the way to London to get it signed). Afterwards, a bunch of us stalked  accompanied the authors to a local watering hole and we all spent a good few hours drinking and chatting. I got to meet some old friends, as well as plenty of new faces, which was fantastic. As always, events like this really drive home  what a brilliant spirit the genre community has; the enthusiasm is utterly infectious. I was especially pleased to grab a few minutes with Adam Nevill, since we'd exchanged a few emails and it was great to have a chat face-to-face. While I think of it, Jason's just done a good interview with Adam which you can find here.

Anyway, a great night. Next stop - Alt Fiction next month!
Posted by James at 19:35

Definitely, and it was great to meet you along with everyone else!

Saw you there, but never got the chance to say hello. Great evening with a lovely bunch of people :-)

I was hoping to see that picture of you kissing his head! Still, without that, it looked as if it was a great event.