During my brief stay in London to attend the Forbidden Planet signing, I managed to grab a quick coffee with Jon and Simon from Gollancz. Not only were they kind enough to give me some exciting books (including The Iron Lung Captain by Chris Wooding, the follow-up to the wonderful Retribution Falls), they also gave me a glimpse of the UK artwork for Scott Lynch's highly anticipated novel The Republic of Thieves.

Jon and Simon kindly gave me permission to post the artwork for you all to see, so behold! 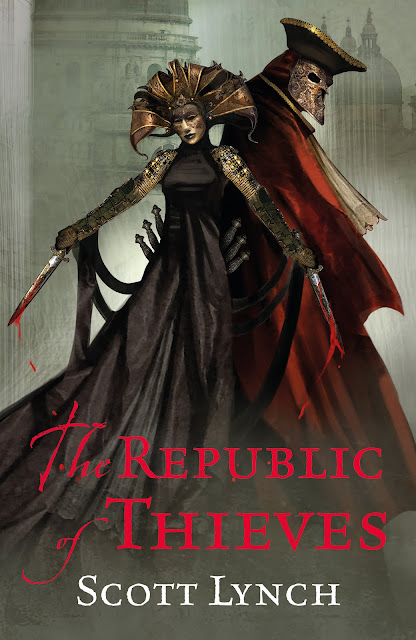 I really like the Venetian influence - the masks are very reminiscent of those you see worn by revellers in Venice during the carnivale. This is the work of the same artist that provided the covers for the first two novels, though as you can see this design differs from the previous covers in that there's figures featured here (Locke and Sabetha, I think) and subsequently there's more of a focus. I like the colour scheme as well, the rather ominous reds and blacks work rather well.

While we're at it, here's the very rudimentary blurb (warning: contains minor spoilers for the previous novel)

After their adventures on the high seas, Locke and Jean are brought back to earth with a thump. Jean is mourning the loss of his lover and Locke must live with the fallout of crossing the all-powerful magical assassins the Bonds Magi. It is a fall-out that will pit both men against Locke's own long lost love. Sabetha is Locke's childhood sweetheart, the love of Locke's life and now it is time for them to meet again. Employed on different sides of a vicious dispute between factions of the Bonds Sabetha has just one goal - to destroy Locke for ever. The Gentleman Bastard sequence has become a literary sensation in fantasy circles and now, with the third book, Scott Lynch is set to seal that success.

I think it's awesome.

Everyone who thinks differently can go to hell.

Is it definitely the same artist as the original editions of the first two which you link to? Those covers look pretty stock, in fact, the original Lies cover looks like it is just a photo of Venice with a bit of processing. This new cover looks much more like the recent reissue covers (which are much better). But yeah, thumbs up from me. And it spells the title right which is an improvement.

Martin - yeah, definitely the same artist. Must admit I really like the original cover for Lies, though the more recent paperback one is lovely too.

Great art. It feels very divergent to what was done in the past since it is character focused, but it beautifully detailed.

Although you could argue that a guy in a mask isn't too far removed from the all the hooded men we've seen on book covers lately. At least it's a good mask.

Must admit I really like the original cover for Lies

The use of the really restrained colour palatte - blue for the first, red for the second - does work well but I think I prefer the more distinctive and atmospheric newer ones. Congratulations to Benjamin Carre.

I love this one.

However, upon seeing it I couldn't help but remark, "Oh, it's Locke and Jean...."

Yeah, I know it is Sabetha, but I am more amused the other way.

I absolutely love it. And although it departs from the previous covers I don't have a problem with this. If all the covers were as good... :)

Terrific artwork. Having read the previous two volumes and been rather underwhelmed and a little miffed at what I felt was a bit of a waste of potential (as far as the two main characters), I'm not sure I'll read book 3. Sounds a bit too convenient that we finally met to meet the fabled Sabetha, under such adversarial conditions. I'll wait for the reviews, of course... if more is revealed about the ancient long-vanished culture that produced the elderglass cities, I'll likely read it, since that's what I found most intriguing about the series.

Nice coup with the artwork. It is a great cover.

Oh yum ... Beautiful. Some Scott Lynch related news was just what I needed to cheer me up after being stuck on a broken down train for two hours :)

I am so looking forward to this book. I adore the others.

Love it! Far superior to the bland cover that has been on Amazon.

Who is the artist?

Lou - the artist is Benjamin Carre.

I would say SUPERBE