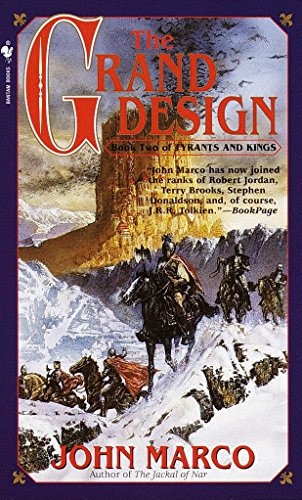 As I'm only halfway through Joe Abercrombie's Last Argument of Kings, and not expecting my interview with John Marco to conclude until later this week, I thought just to tide us over I'd post another older review - this one of The Grand Design, the second book in John's Tyrants and Kings trilogy.
John Marco set himself very high standards with the first novel in his Tyrants and Kings trilogy. The Jackal of Nar breathed new life into the genre of Heroic Fantasy, introducing a wealth of well-defined characters and intriguing technology. The problem with this was that he would have to reproduce this same standard of excellence in the second book in the series, The Grand Design.

Marco however has gone one better. Not only has he written a fantastic sequel, he has bettered the first novel in almost every respect. The Grand Design is a very different book from its predecessor. Whereas The Jackal of Nar focused on the effects of war on one man - Richius Vantran - The Grand Design is concerned with the destructive forces of revenge on a variety of people. Richius was undoubtedly the main character of the first book, yet while he features prominently in The Grand Design Marco has shifted the emphasis to include other familiar characters, giving them more significant roles in the story. The result is highly impressive - a novel that revolves around several distinctive figures, all pursuing different goals. The Machiavellian Count Biagio really comes to the forefront of proceedings, with what he calls his Grand Design - his plan to seize back control of Nar from the Archbishop Herrith. This plan expertly reflects Biagio's cunning, intellect and ambition.
Yet nothing is black and white in Marco's world of Nar. While Biagio is no doubt an unscrupulous manipulator, at the same time he is revealed as being helplessly in the throes of the life-sustaining drug that he relies on. More than once his good side temporarily shines through, where he shows he is capable of treating people fairly and with genuine care. Archbishop Herrith, who has now seized control of Nar and is Biagio's mortal enemy is portrayed similarly. Here is a man who orders the death of thousands, yet shows his caring side when he takes pity on the fragile Lorla Lon, a young woman trapped inside a girl's body. In fact it is Lorla Lon who is arguably the most tragic character of the novel; Marco's skill with character development enables the reader to feel the pain of Lorla, as she struggles to understand her role in the proceedings and why she has been trapped in a child's body. Unsurprisingly, Count Biagio has much to do with her pitiful situation.
Many of the other characters are presented as being similar to Biagio and Herrith in that they are multi-faceted. Simon Darquis, sent by Biagio to steal Richius Vantran's child is loyal to his master yet at the same time riddled with guilt, while Prakna, the commander of the Lissen Navy, is an honourable, proud man who at the same time possesses a violent hatred of Narens that often clouds his better judgement. This variety of multi-faceted characters is what makes Marco's novels so successful - few of the novel's characters are purely good or sickeningly evil, with the result that they seem startlingly real. As with The Jackal of Nar, it is impossible not to sympathise and care about most of the characters, even the manipulative Biagio. Readers who enjoyed the violent, bloody battles of the first book will not be disappointed. Whilst the emphasis in The Grand Design is more on subtle political maneuvering and backstabbing, there are still plenty of conflicts - including, for the first time, sea battles.
As ever, Marco proves adept at creating battles, setting the tension at a perfect level. By concentrating on the characters in such situations, he makes each battle seem more personal, therefore carrying greater implications. The Grand Design is more violent, bloody and destructive than its predecessor. Countless people meet their ends - few of them pleasant - and this emphasizes the brutality of the world that Marco has created. Yet we are also introduced to the islands of Liss, which illustrates the subtle beauty of Marco's world, mostly obscured behind the black clouds of war.
The Grand Design is a masterclass in plotting, character development and action sequences. Few novels can match the twists and turns of his plot, his well-developed characters and his fluid writing style. The Grand Design will keep you guessing right until the end, and with the cunning and secrecy of Count Biagio, and the desperate heroics of Richius Vantran, there is never a dull moment.
9/10
Posted by James at 22:29