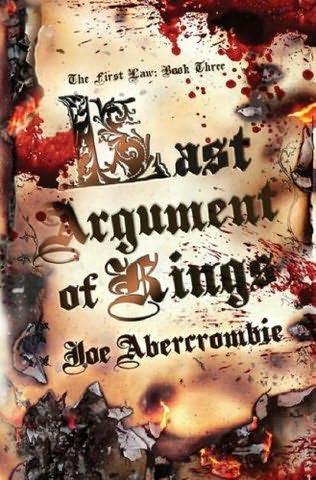 Let's get a couple of things straight before we continue: the first is that this review does not contain any spoilers whatsoever. The second is that although Joe Abercrombie very kindly judged my humble entry to his competition as worthy of a prize as fantastic as an ARC of Last Argument of Kings, that never meant I was going to kiss his ass and wax lyrical about this book if it was crap. When I started this blog it was with the intent to provide objective reviews without bias, despite any acquaintance with the author in question. Even if it made me feel like an ungrateful bastard. Rest assured that what follows is the truth, and nothing but the truth. So, let's get to it.

As I said in an earlier post, this book is a monster. Weighing in at a hefty 672 pages (200 or so more than each of the previous books) , you can't help but feel a tingle of anticipation at the artwork and the back cover blurb. The end is coming, the blurb proclaims. Oh, it is indeed. All 672 pages of it.

Forget what went before. The battles won and lost, the treachery, the journeys and the hardship. As fantastically entertaining as the first two books were, it was all a prelude to the final chapter, where the fate of a nation (and much more besides) hangs in the balance...

I mentioned in my review of Scott Lynch's Red Seas Under Red Skies that I was worried it wouldn't live up to the brilliance of his debut novel. I never had that concern with Abercrombie - his second book had already proved to match and even surpass the first, so I had no doubts that the final instalment in The First Law trilogy would meet my expectations.

How wrong I was. Last Argument of Kings didn't meet my expectations. It shattered them. Scaled them effortlessly and then for good measure, sprouted glorious golden wings, flapped lazily upwards and then shat on them from a great height. Believe me when I tell you, this book is something special. I hardly even know where to start.

Characters. Let's start with the characters. Always one of Abercrombie's strongest points. Usually in works of epic fantasy, you often find a character or two that you think are a bit dud and so when you turn the page and find it is another of 'their' chapters, you roll your eyes and plough through as quickly as possible. This is one pitfall Abercrombie skilfully avoids. I love all of his characters, from the major players down to the minor ones that make a brief appearance and disappear again. At no point did I find myself tiring of any of them. They are all so wonderfully rendered, so deep...all with their flaws, their strengths, their secrets, their vices, their own voices. I felt their horror, their joy, their sorrow, their pain. Abercrombie does a brilliant job of painting his characters in varying shades of grey. There is no real evil here. Every character has their goals, their motives, all caused by forces beyond their control. Subsequently there is a real human quality to Abercrombie's cast, and it is this that makes his characters so funny, so memorable, so believable. Some get what they deserve and some don't. There's the realistic aspect again. You have to be realistic after all.

What of the plotting though? Some critics derided the first two books in the trilogy as being too pedestrian, too much style and no substance. Too much scene-setting, too much building up and not enough resolution. I don't agree, but I see where this argument comes from. These critics are about to eat their words. Last Argument of Kings is one of the most tightly-weaved, thrilling plots you'll have the pleasure of enjoying. Despite the book's bulk, there is no gristle - it's all meat. If Last Argument of Kings was a steak, it would be massive and rare: plenty to tear into, with plenty of blood. A lot of blood.

Abercrombie weaves the various plotlines together with stunning skill and an undiminished knack of being able to surprise. Some things you will see coming. Some you most certainly won't. And even the ones you do see coming you almost think that maybe you were meant to. As always, Joe delights in taking standard tropes and turning them upside down. And it all works so well. The first 100 pages are a little gentler than the rest of the novel, but then it explodes. Some advice: write 'BREATHE' on your thumb so you don't forget to as the action hots up.

Abercrombie was once accused of 'writing like an eight-year old.' That person is going to feel very, very foolish indeed. Abercrombie's writing, always smooth and engaging, just reaches a whole new level in Last Argument of Kings. He just makes it look so damned easy. You almost start to expect that he writes a couple of novels before breakfast. His dialogue is as smooth as ever, but it is his battle scenes that really impress: rarely do you read such hard-hitting, visceral prose. You can smell the blood, feel the press of bodies and hear the shouting and screaming. You're almost there yourself, and damned glad that you're not.

But it's not just blood and guts and political treachery. There are themes here as well. The first two novels didn't really achieve this, but Last Argument of Kings makes you think. There are numerous questions here, if you look for them. What is the true nature of evil? Is it possible to change, to be a better person? Can you escape your past? Is the grass always greener on the other side? And so on. There are themes too, big ones: love, redemption, destiny. But above all, finding the courage to do the decent thing. The right thing.

With Last Argument of Kings, Abercrombie has cemented himself at the top of the fantasy genre. He deserves to be mentioned in the same breath as the other titans on top of the ever-increasing pile. He's written something not far short of a masterpiece, something special. Last Argument of Kings has everything you could ask for: huge battles, political intrigue, masterly characterisation and surprises by the bucket-load. This book will by turns shock you, excite you, make you laugh, and above all entertain you.

Mr Abercrombie, I salute you.

Absolutely agree with your review. I'm an ARC comp winner too - and was consumed over one breathless weekend as I read the final of this fantastic trilogy.

Exciting times, when you're able to catch a startlingly good author early in his career.

Couldn't agree more Ady. Not an easy book to put down and it is great to find a new author starting out as strong as this.