£1m Alastair Reynolds deal - a shot in the arm for Space Opera? 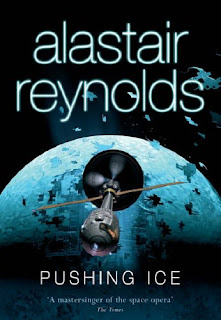 As reported all over the blogosphere, SF author Alastair Reynolds has signed a £1m deal with UK publisher Gollancz for ten books.

It's a staggering figure, make no mistake. The only deal it reminds me of is the one Steven Erikson signed for his Malazan series, which was £675,000 for ten books. The Reynolds deal dwarfs this.

I've heard one or two folks suggest that Gollancz are taking a huge risk with such a deal, but I disagree. £1m is a huge amount of money, sure, but it breaks down to 100k a book. With world rights, Gollancz can sell into numerous territories and the money these foreign deals brings in will recoup much of their expenditure. On top of that, Reynolds is a popular writer who is clearly going places, so Gollancz's faith seems well-placed. Good on them for showing such support.

On another note - what does this deal mean for the Space Opera genre? I must admit I know next to nothing about this genre, so I can't comment on what this deal means for it. Anyone care to enlighten me? Surely it's a massive boost for the genre to see such a deal being made.
Posted by James at 13:31

Anyone care to enlighten me?

I don't think it changes anything. Banks and Hamilton were the best selling British SF writers and they all write space opera. Reynolds is just joining them at the top table.

I've read "Revelation Space" and although ti had some cool concepts (I seriously want one of those EVA suits) it didn't really grab me as being all that great. That being said I have a friend who is absolutely mad for Reynolds and she's been reading my recommendations so I guess I'll give him another go or two.

No-one makes any money writing short fiction, and Reynolds' track record of delivering a qualitative *popular book* each year for the last 10 is the only fact that's really germane here, but it is sort of ironic that here Reynolds breaks the bank with his novel deal, when the novel isn't even his strongest form.

I loved Pushing Ice and enjoyed Chasm City a good bit, but got bogged down in Revelation Space and The Prefect.

Meanwhile, his short fiction--exemplified but by no means circumscribed by "Galactic North," "Beyond the Aquila Rift," and "The Sledgemaker's Daugher"--is almost never anything short of breathtaking.