Tchaikovsky's 'Shadows of the Apt' to be released in US! 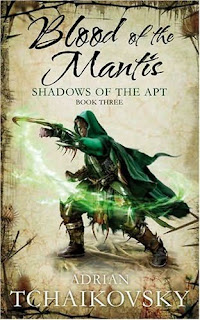 Exciting news for all of you folks on the other side of the pond...Pyr have just announced a deal to publish the first three books in Adrian Tchaikovsky's Shadows of the Apt series in the United States.

Pyr intend to publish the three novels - Empire in Black and Gold, Dragonfly Falling and Blood of the Mantis - in three consecutive months next year (hopefully March - April - May).

Editor Lou Anders is clearly unable to conceal his delight, as he says, "Shadows of the Apt is a fantastic fantasy, with steampunk elements, that absolutely blew me away when I read it. Airships, steam trains, giant insects, fantastic characters, great action..."

Anders also confirmed that all three US books will boast brand-new artwork from Jon Sullivan, who also did the excellent UK covers for Dragonfly Falling and Blood of the Mantis.

Personally I'm really pleased for Adrian, as he seems a thoroughly nice bloke and in any case I'm a big fan of The Shadows of the Apt - can't wait for my review copy of Blood of the Mantis to turn up (any day now, any day...).

Check out my reviews of Empire in Black and Gold and Dragonfly Falling, as well as the interview I did with Adrian some time ago.
Posted by James at 13:07

I won't bother. I go to The Book Depository and get them there. Not to mention that UK covers are almost universally better than US covers. US covers always seem to be aimed at 10-12 year old video game addicts.

"Shadows of the Apt is a fantastic fantasy, with steampunk elements, that absolutely blew me away when I read it. Airships, steam trains, giant insects, fantastic characters, great action..."

You had me at "steampunk." Think I might give this one a go!

have the first 2 books sitting on my shelf and am awaiting the third before reading.

I'm also a big user of bookdepository.co.uk - the cheapest and best book seller on the planet.

I read Empire in Black and Gold and that is my impression:
There is a wise man, a threat, a “party”, a travel, betrayal, fights. Hmmh, sounds familiar. But there are no elves, dwarfs, hobbits or trolls. Instead we find steampunk elements and most unusual: insect-kinden.
Insect-kinden? There are several human races who long ago adapted to prehistoric insects. Examples: mantis-kinden are warriors, beetle-kinden like mechanics, wasp-kinden can fly and use stingers.
For more information please visit Shadows of the Apt.
Adrian Tchaikovsky combines all these things to a fast pace and imaginative web.
The whole story is a fanciful spiderweb and you are the fly. Once you’re captivated you only can free yourself by finishing the book.

But be aware the next web Dragonfly Falling has been woven in bookstores (UK 6th of February 2009). The final novel of the trilogy – Blood of the Mantis – will be released in August 2009 (UK).

If you like epic fantasy beyond elves and dragons then give the insect-kinden a try.