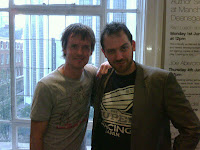 As with the Rothfuss gig last week, there was a decent turn-out. Joe kicked things off with an entertaining account of how he got into writing, bringing us right up to date with his latest novel Best Served Cold. This was followed by a Q&A session, which - as is usual at Manchester signings - was lively and a lot of fun. I can't recall much of what was said...let's see...oh yeah - Joe's favourite Streetfighter 2 character is Guile "because of the hair", although he's also rather partial to Blanka, "again, because of the hair."

Trust me to remember the most random answer of the night and not much else... Ah, a couple of other things - Joe hinted that we may see a jump in the timeline of his world, with gunpowder and other technologies making an appearance, and that he'd like to try his hand at a historical novel at some point. He also admitted that he enjoyed writing the torture scenes in Best Served Cold "more than I should have" and that he was unhappy with the first half of the book during the writing process, and this did affect his confidence a little (something that people might find hard to believe!).

Anyway, the signing came next. In my infinite wisdom I hadn't thought to charge my camera the night before, and the sodding thing decided to pay me back by turning off while I was trying to have my picture taken. Gah. Fortunately Jon from Gollancz was on hand to save the day, and took the pic you can see above on his blackberry - cheers Jon! I had a brief chat with Joe; it was cool that he knew Speculative Horizons - "Oh, yeah!" he exclaimed, "the black and green one!" Colour scheme win! Awesome.

Even more awesome was the fact that I was kindly invited to join Joe, Jon, Darren from Orbit/Little, Brown and Darren's lovely other half for drinks in a local pub. And even more awesome still, Joe bought me a pint. Now that is a win of the purest, rarest kind. Seriously though, we all had an excellent couple of hours of 'geek talk' - video games, history, books and publishing, and so on... Brilliant stuff.

So, thanks to Joe and Jon for an excellent evening. Look forward to doing it again next time around, though next time I'll be buying the drinks...
Posted by James at 20:49

You complete and utter bastard.