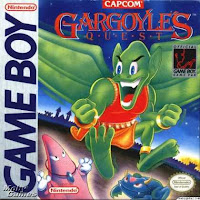 There's no doubt that video games have come a long way in the last ten years - in many ways, games these days are more of an experience than a game. In terms of gameplay and visuals, modern games are generally superior to their older counterparts. Yet there's one trump card that older games often still retain: the fact that many of them are very hard to finish. This is an element that I've found lacking in many modern games - the fact that they're over too quickly and too easily.

Video games used to be hard - some of them really hard. 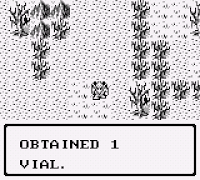 Gargoyles Quest on the original Nintendo Gameboy was one such game. In fact, it was so tough that one magazine actually begged readers to send in a walkthrough, as none of the magazine staff could finish the game (this was in the days before the interwebs, where if you got stuck on a computer game you were pretty much screwed).
Me being a hardcore little gamer, I finished Gargoyles Quest without any help.
Like most RPGs from this time period, Gargoyles Quest had a delightfully clichéd storyline:


A long time ago, the Ghoul Realm barely escaped great peril. A large army of Destroyers came from a neighboring universe. The creatures of the Ghoul Realm were no match for the powerful Destroyers. Just when everyone had given up hope, a great fire swept over the Realm, wiping out the Destroyers' army.
Several hundred years have passed and the Realm is threatened once again... 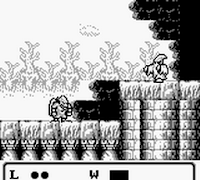 The game itself mixed side-scrolling 'platform' action (used for dungeons) with a top-down 'world-map' view (which was employed as you travelled from location to location). The RPG elements were pretty thin on the ground, yet they did add a little bit of depth to what otherwise would have been a rather straightforward platformer. As mentioned, the game was notable for its difficulty level (if you died during any of the dungeon sections, you'd often have to start the level over). Difficulty aside, the game also boasted a decent, atmospheric soundtrack and suitably dark visuals.

One of the best elements - as was often the case with such games - were the 'bosses' that had to be defeated at the end of each major dungeon section, mainly because of their obscure names. For example, the demonic fish that guarded the end of the first level (see left) is called 'Zundo Druer' (wtf?) while the similarly demonic snail (yep, a snail) that lurks in the 'Desert of Destitution' (cheesy name 4tw!) is called 'Zakku Druzer'. Obscure.

One of my favorites too...never finished it...you had to start ALL OVER when you lost ! Not hardcore enough at that time :)

Nice! I spent a number of hours with this game. I should bust out the ol' gameboy.

wow, never would have imagined someone bringin this up on a blog these days! No, I never finished the game either. I wonder where my old gamebody is...

Hahah, god I do miss the old days. I remember when I was a 5 year old and I stayed up till 12am the first time to beat Zelda with my father. Looking back on it though, I still don't see how I managed to beat the original final fantasy at that age. If you want a good extraordinarily punishing, but rewarding modern game, try Demon's Souls. I suggest playing it at a friend's place incase the sudden desire to throw a controller at the TV arises.

Joshua - games that made you throw the controller at the TV practically deserve a seperate post of their own. Probably the worst game for that I ever played was Rebel Assualt on the PC...that game drove me nuts at times, largely due to a clunky control system that made it nigh-on-impossible to avoid laser fire from TIE fighters.

I beat this game myself a few months back. I played through the sequel on NES several years ago and really enjoyed that too.

There's supposed to be another on SNES but I haven't tried it yet.