Assassins and vampires seem to be all the rage at the minute, so it was inevitable that a book would come along that combines the two. While I'm not really into the whole vampire gig (at least not the whole Twilight-esque variety) and am not overly bothered about assassins, I still think The Fallen Blade by Jon Courtenay Grimwood sounds like a lot of fun. Plus it's set in Venice, which is a wonderful setting. Anyway, artwork and blurb below. 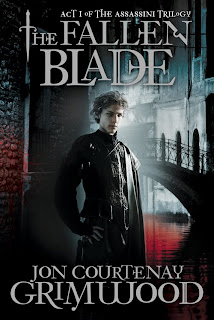 In the depths of night, customs officers board a galley in a harbor and overpower its guards. In the hold they find oil and silver, and a naked boy chained to the bulkhead. Stunningly beautiful but half-starved, the boy has no name. The officers break the boy’s chains to rescue him, but he escapes...

Venice is at the height of its power. In theory Duke Marco commands. But Marco is a simpleton so his aunt and uncle rule in his stead. They command the seas, tax the colonies, and, like those in power before them, fear assassins better than their own...

In a side chapel, Marco’s fifteen-year old cousin prays for deliverance from her forced marriage. It is her bad fortune to be there when Mamluk pirates break in to steal a chalice, but it is the Mamluks’ good luck – they kidnap her...

In the gardens beside the chapel, Atilo, the Duke’s chief assassin, prepares to kill his latest victim. Having cut the man’s throat, he turns back, having heard a noise, and finds a boy crouched over the dying man, drinking blood from the wound. The speed with which the boy dodges a dagger and scales a wall stuns Atilo. And the assassin knows he has to find the boy...

Not to kill him, but because he’s finally found what he thought he would never find. Someone fit to be his apprentice...

The cover is typical of Orbit's recent approach, though I like it more than many of their other covers; I like the tone and the tint of blood red on the water of the canal. I think The Fallen Blade sounds like it could be a decent romp, so may well check it out.
Posted by James at 12:58

"Act 1 of the Assassin Trilogy"? Pardon me while I lol...