...because you can almost taste the weekend, right? I know I can. And it's a three-day weekend, since it's a bank holiday in the UK. Whoop.

So here's some tasty linkage for you. 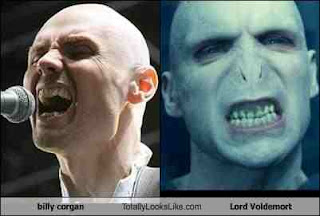 Billy Corgan is one of my idols. His music defined my teenage years; few people have written songs that have spoken to me like his. Yeah, maybe he's got a massive ego - who gives a shit? Melloncollie and the Infinite Sadness is an amazing album. He's a great musician, but a hugely underrated lyricist. Some of his lyrics are more like poetry: elegant, evocative, mournful...

But he sure does look like Lord Voldemort. Well, here at least. Sorry Billy, but you do. Love you lots, though.

The interwebs have been a fairly vitriolic place this week, with a fair few shitstorms raging here and there. Here's the latest - and most intense - in which the Speculative Scotsman suggests that the best 'literary' novels are superior to the best that the fantasy genre has to offer. Naturally, it's pissed a lot of people off.

Hell hath no fury like a genre fan who's just been told their genre sucks.

As for what I think...I just think the article is weird. I have a lot of respect for Niall, I think he's a good blogger and has done a terrific job since he started his blog. But this article just seems so poorly conceived, it seems strangely out of character. The argument is hopelessly subjective, and while Niall is at pains to point out he's not saying fantasy is inferior to 'literature', I'm afraid that's what his article appears to be suggesting. It's not angered me like it has many others, but I must admit it has shades of the infamous Bilsborough interview, in which the much-slated debutant said something vaguely similar (and ominously was never heard of again). Hopefully Niall will still be here once the dust has settled...

The Wertmeister has been a busy little bee as usual, and among the many books he's reviewed is The Alchemist in the Shadows, by French author Pierre Pevel who - if you're bothered - won the Gemmell award for best debut novel (for The Cardinal's Blades). Gorgeous cover.

Aidan's got a thorough, exhaustive interview with Jeff Vandermeer. I've not had time to read it - come on, it's huge! - but I'm sure it's good. Moher always delivers. That's why, in our highly secretive blogger circles, we call him 'The Milkman.' True story. Maybe.

The Mad Hatter has reviewed Brent Weeks' The Black Prism.

Paul, over at Empty Your Heart of its Mortal Dream (good blog, check it out) has reviewed Margaret Atwood's The Hand Maiden's Tale.

There's an interesting discussion about the finer details of cover art over at MarkCN's blog (where else, that's where the action always seems to be these days). Some very interesting input from Tor editor Julie Crisp.

And finally, a great post from a writer that - after 15 years of struggle to 'make it' as a writer, just can't face writing anymore. Strangely moving.

Have a great weekend, you crazy cats. See you next week for more genre-tastic action.
Posted by James at 09:00

Thanks for the linkage!

Well I think Niall had some other concerns then having an agreeable discussion, "publicity" people an "involvement". I think a blogger could do with both, and bloggers do certainly deserve this since they are putting in a lot of effort into their blogs.
I think Niall succeeded in getting both, from the increasing number of posts in the comments section of his post!

I'll join you in whooping for joy at the three-day weekend, James.

Also yes. Yes to many things. But yes in particular to "hopefully Niall will still be here once the dust has settled..."

Bloody right I will be.