I was right about the artwork for 'The Heroes'...

It does look better with blood.

Here's a reminder of the earlier artwork: 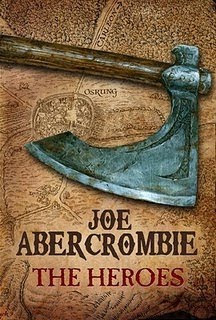 At the time, I said, "it does seem a little bare compared to its predecessor (I always liked the coins and blood on the BSC cover; lovely little detail)." 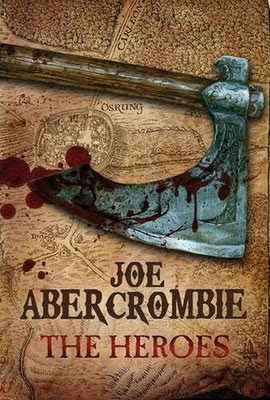 See? How much cooler does it look with a bit of blood splashed across it? By the way, this updated artwork comes courtesy of the Mad Hatter's Bookshelf (who magically always seems to be the first to unearth new artwork).

While we're at it, here's the recent blurb:

They say Black Dow's killed more men than winter, and clawed his way to the throne of the North up a hill of skulls. The King of the Union, ever a jealous neighbour, is not about to stand smiling by while he claws his way any higher. The orders have been given and the armies are toiling through the northern mud. Thousands of men are converging on a forgotten ring of stones, on a worthless hill, in an unimportant valley, and they've brought a lot of sharpened metal with them.

Bremer dan Gorst, disgraced master swordsman, has sworn to reclaim his stolen honour on the battlefield. Obsessed with redemption and addicted to violence, he's far past caring how much blood gets spilled in the attempt. Even if it's his own.

Prince Calder isn't interested in honour, and still less in getting himself killed. All he wants is power, and he'll tell any lie, use any trick, and betray any friend to get it. Just as long as he doesn't have to fight for it himself.

Curnden Craw, the last honest man in the North, has gained nothing from a life of warfare but swollen knees and frayed nerves. He hardly even cares who wins any more, he just wants to do the right thing. But can he even tell what that is with the world burning down around him?

Over three bloody days of battle, the fate of the North will be decided. But with both sides riddled by intrigues, follies, feuds and petty jealousies, it is unlikely to be the noblest hearts, or even the strongest arms that prevail.

Three men. One battle. No Heroes.

Sounds pretty cool - the northern sequences in The First Law trilogy were easily my favourites, so I'm hopeful of liking The Heroes a lot more than I liked Best Served Cold.

In case you've not seen it, there's a generous sneak preview available on the Gollancz blog.

Anything would be better than the nihilism of Best Served Cold.

I don't know why people were so surprised by the 'nihilism' of Best Served Cold. Joe told us in his blog that the book would be reminiscent of the film Point Blank which starred the late, great Lee Marvin.

It ain't exactly a barrel of laughs as movies go and the characters are all of varying shades of black with Lee Marvin wreaking a bloody revenge after being double crossed. So why the criticism or feeling that it was TOO GRITTY, TOO DARK? This was a recurring thread on the old fantasy fora.

I found it rather fun and....DARK, NIHILISTIC AND GRITTY!!!

Apparently, Heroes is partly inspired by epic World War Two movies such a A Bridge Too Far. It will be very interesting to see how he translates that into the First Law world.

Btw James, your appreciation of Winter Warriors impressed me so much it drove me into the attic where I dug out my copy. Ah, the balm of slipping into a David Gemmell novel. Bliss.

Iain: it wasn't the nihilism of BSC that I didn't get on with - it was the fact that I just couldn't bring myself to care about the characters and what happened to them. I found them to be rather dull, on the whole - not at all like the entertaining characters in the first trilogy. I don't think this will be a problem with The Heroes, so expect to like it more.