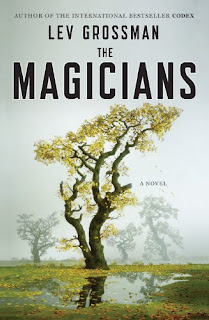 This is a novel that wears its influences brazenly (there's firm nods to J. K. Rowling, C. S. Lewis, J. R. R. Tolkien and D&D) and yet despite that it's still a difficult novel to define. 'Harry Potter on acid' doesn't really come close; I've seen the comparison with J. K. Rowling's young wizard made too much for my liking, not just because Grossman's tale of a young man enrolling at a magic school is much darker and edgier than Rowling's work, but also because he asks a very good question that Rowling - to my knowledge - doesn't: what the hell do you do with yourself when you've graduated from magic school, wield considerable power and have the whole real world spread out before you?

Note the emphasis on the world 'real', since this is one of the fundamental points of Grossman's book - how the real and fantastical worlds come together to cause no shortage of problems for his protagonist, the young Quentin Coldwater. Quentin is a character that many of us will feel familiar with, (since many of us have probably been similar people at some point, or maybe even still are): a bored, depressed young man who can't see where he fits into the mundanity of modern life, and longs to escape into a fantastical world that he has become obsessed with (in Quentin's case, the Narnia-esque world of Fillory).

Yet unlike most people, Quentin gets his chance to fulfil his personal fantasy when he enrolls at 'Brakebills College for Magical Pedagogy', somewhere in upstate New York. Soon he finds himself wielding power the likes of which he has only ever dreamed of. It all seems too good to be true...and of course, it is. With power comes responsibility, and even in the fantastical environs of Brakebills the consequences are terribly real.

The premise of a group of young people learning magic and then having to apply it to 21st century living is a very fertile one, and one that Grossman exploits fully, not least in the various issues and themes that he addresses. Quentin - an engaging protagonist that inspires effortless sympathy on the reader's part - learns a lot of lessons the hard way: not to abuse or toy with the power he wields, not to try and run away from the problems the real world throws at him, and to be very careful what he wishes for. Quentin's (mis)adventures also raise numerous questions - is it ethical to teach young men and women to harness such a potentially destructive force, that can (and does) kill? Is escapism just pointless wish-fulfilment that only leads to disappointment (or even worse)? What do you do when you've achieved the one goal you've ever had, and realise that life doesn't just end happily after like it does in the stories? 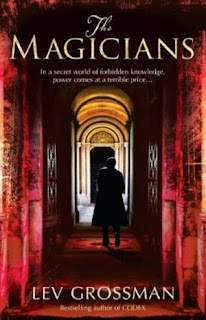 Despite the exploration of themes and the questions that they raise, The Magicians is fundamentally an accessible, enjoyable fantasy adventure in the great tradition of the influences it makes no attempt to hide - albeit a fantasy adventure laced with irony and disaffection, with its feet planted very firmly in the bitterness and bile of the real world. Grossman's prose is fluid and furnished with evocative embellishments, and he has imbued real pace and purpose into the story. Furthermore, Brakebills - clearly based on the English public school model - is the kind of school everyone wishes they attended, and is subsequently familiar and fun to read about (the English influence extends to even the characters themselves, as all have very 'classic' English names - Quentin, Janet, Eliot, Richard, Alice and so on), which creates an almost whimsical atmosphere.

Watching Quentin and his merry band of slackers struggle with their powers and their relationships - especially when they're trying to put them in the real world's context - starts out as enjoyable and swiftly becomes addictive. Grossman manages to inject real personality into most of the principal characters and is extremely good at depicting their emotions and relationships - particularly that between Quentin and his love interest, which packs a serious, realistic emotional punch. Yet there are moments of well-judged humour as well (I laughed out loud more than once - on the train, no less) and it's also fun to see how Grossman pays tribute to his influences (the spells 'Magic Missile' and 'Prismatic Spray', for example, are lifted directly from D&D).

As always, there are some flaws. I personally thought that Quentin was thrust rather too quickly into the magical world of Brakebills, to the extent that I found it hard at first to quite understand his resentment of the real world - simply because I hadn't seen enough of his life there. A couple more pages to demonstrate his poor relationship with his parents and his general disaffection would have helped. Furthermore, I found his transition to Brakebills - to a different world - rather subjective; even for someone so obsessed with a fantasy world that he almost believes in it, he accepts his new life far too readily for my liking.

Certain emotional events are not emphasised enough - the horrible fate of one student fairly early on is clearly hugely tragic and shocking, yet the pupils seem to forget about it very swiftly. 'Book three' (the novel is divided into four 'books') is probably the weakest, mainly because the story is at its most potent when dealing with Quentin's struggles in the real world. When the action moves to other more fantastical realms - mainly in book three - the impact seems somehow muted (with one notable exception). Some readers might take issue with the fact that there is no discernible magic 'system' and that it's sometimes hard to get a feel for what constitutes a serious drawing of power and what doesn't, though this wasn't much of an issue for me.

Verdict: Flaws aside, The Magicians is a very entertaining book. Grossman has delivered a creative, thought-provoking fantasy that is all the more powerful for its links to our own reality and the issues it raises (as I've said before on this blog, this is when the fantasy genre is at its most potent). Despite the obvious debt it owes to various genre classics, it still somehow manages to feel fresh. The Magicians is by turns exciting, shocking, amusing and heart-wrenching. Easily one of my favourite books I've read this year - highly recommended.
Posted by James at 19:01

I've had my eyes on this book since I first heard about it a few weeks ago. Nice review, and I look forward to reading the book even more now.

Very nice review, James :)
I just received a copy of "The Magicians" today. With so many wonderful reviews I have to read it very soon.

This is not the first review of "The Magicians" read but it is the most convincing for me. Now I know I definitely want to read this book.

Just in case you missed it, there's another review on this book over at Slashdot: