Mark Charan Newton reveals blurb and artwork for his next novel...

Over at his blog, Mark Charan Newton has unveiled the artwork for City of Ruin - the second instalment in the Legends of the Red Sun sequence. 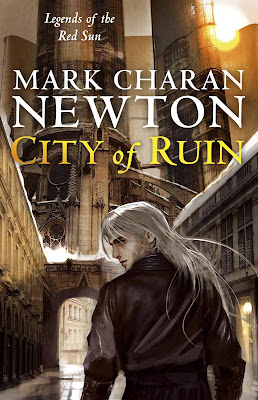 And here's Mark's 'attempt' at a blurb:

"Viliren: a city of sin that is being torn apart from the inside. Its underworld is violent and surreal. Hybrid creatures shamble through shadows and there is a trade in bizarre goods. The city’s inquisition is rife with corruption. Barely human gangs fight turf wars and interfere in political upheavals. The most influential of the gang leaders, Malum, has nefarious networks spreading to the city’s rulers, and as his personal life falls down around him, he begins to embrace the darkness within.

Amidst all this, Commander Brynd Adaol, commander of the Night Guard, must plan the defence of Viliren. A race that has broken through from some other realm and already slaughtered hundreds of thousands of the Empire’s people. As the enemy gather on next island, Brynd must muster the populace – and the gangs. Importing soldiers and displacing civilians, this is a colossal military operation, and the stress begins to take its toll.

After a Night Guard soldier is reported missing, it is discovered that many citizens have also been vanishing from the streets of Viliren. They’re not fleeing the city, they’re not hiding from the terrors in the north – they’re being murdered. A serial killer of the most horrific kind is on the loose, taking hundreds of people from their own homes. A killer that cannot possibly be human.

It is whispered that the city of Viliren is about to fall – but how can anyone save a city that is already a ruin?"

On the whole I really like the artwork, especially the way it has echoes of the cover of the first book (in terms of the urban background, and the colour scheme). You're always playing with fire when you place a character on the front in terms of representation, simply because everyone pictures them slightly differently. In this case, the depiction of the albino Brynd doesn't quite hit the mark for me, perhaps because he looks quite anime-ish...or maybe because he doesn't quite look 'hard' enough. Still, he looks pretty cool and overall I like the artwork a great deal.

As for the blurb, it sounds hugely promising with plenty of scope for some weird happenings. Mark has gone on record as saying that this book will be significantly more weird than the first, and having read the first few chapters I can safely say that it is. What I read was also a marked improvement on the first novel in terms of prose; the writing in City of Ruin is more confident (not that there was anything wrong with the prose in Nights of Villjamur!).

So anyway, very exciting stuff. June release for this one, I think. Looking forward to it...

Just got my hands on Nights of Villjamur, The Jack Vance tribute edited by GRRM and Kell's Legend...choices, choices...

I enjoyed reading your interview on Ubiquitous Absence. As you are a Chelsea fan I must ask you your thoughts about the FIFA transfer ban.

Well, since you liked Mieville's The Scar, and Nights of Villjamur has definite hints of Mieville, then I suggest you give it a go! Kell's Legend looks fun as well though. And I expect the Vance tribute anthology is good too...

Glad you enjoyed the interview!

Transfer ban...well, you can look at it in two ways. Firstly, as a genuine attempt by FIFA to clamp down on the poaching of young players from smaller clubs by big clubs. But you can also look at it as a possible attempt by FIFA - and the smaller, continental clubs - to curtail the progress and prowess of the English clubs, as we all know UEFA and FIFA are scared of the English clubs' dominance in Europe and that they favour the Spanish clubs (you only need to look at a replay of Platini handing over the European Championship Cup to Spain last year - he was grinning like a twat).

Anyway, however you look at it, I think the punishment is over the top. Especially since they've not yet confirmed what evidence they have that we're guilty. If we are guilty, surely a payment of a few million quid to Lens as compensation would be a fair punishment? Anyway, we'll appeal and I feel the ban will be reduced. We'll have to wait and see...

It won't harm our chances though of success this season, since we have a good squad and we don't tend to buy in January anyway...