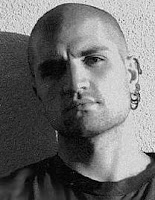 I try to avoid posting things that have already received extensive coverage elsewhere (it annoys me when the blogosphere looks like a big publicity machine) but in some cases I'm happy to make an exception. China Miéville slapping down Facebook certainly qualifies as one such case.

Anyway, to the point: Miéville - who is well known for abstaining from social media - has repeatedly asked the powers that be at Facebook to remove the various fake profiles that certain sad individuals have set up, through which they pretend to be him (you wonder about some people, eh?). Naturally, Facebook couldn't give a toss, so Miéville has written an open letter that has inevitably spread like a rash through the blogosphere.

Since Miéville is a great writer and a lovely guy, and because I think that Facebook sucks grizzled donkey balls (especially when it comes to privacy and security), I've decided to re-post China's letter below.

At least one person, if not more, is/are impersonating me on Facebook, with (a) fake profile(s) claiming my identity. Despite me repeatedly bringing this to your attention, you have taken no action to remedy the situation. And I’m getting very annoyed.

This thing you hold is called a letter. This is the third time I’ve contacted you, and I’m doing so by this antiquated method because, and I realise this may shock you so brace yourself, I have no Facebook account. Which means it is nigh-on impossible for me to get in touch with you. Kudos for your Ninja avoidance strategies.

Back when you had a button allowing me to alert you to a fake profile despite not having an account myself, I contacted you that way. I was answered with a resonant silence. Subsequently, when the problem persisted, I hunted lengthily for, found and left a message on the phone number you go out of your way to hide. Absolutely nothing happened. So here we go again: third time’s a charm.

I am being imitated on Facebook. I believe the only reason anyone is bothering to do this is because I’m a novelist (published by Macmillan and Random House), a writer and broadcaster, with a minor public profile. I think there are one or two community pages about my stuff on Facebook – that of course is very flattering and nice of people to bother. The problem is that there is or are also pages by someone(s) purporting to be me. This is weird and creepy. What’s worse is I know for a fact that some readers, friends and colleagues are friending ‘China Miéville’ under the impression that it is me, and that others are wondering why ‘China Miéville’ refuses to respond to them. And I have no idea what dreadful things or ‘likes’ or ‘dislikes’ are being claimed as mine, nor what ‘I’ am saying.

I know lots of people enjoy being on Facebook. Great. More power to them. Vaya con Dios. Me, though: not my thing. I have absolutely no interest in it. I am not now nor have I ever been a Facebook member. Short of some weird Damascene moment, I will not ever join Facebook – and if that unlikely event occurs, I promise I’ll tell you immediately. In the meantime, though, as a matter of urgency, as a matter of courtesy, as a matter of decency, please respond to my repeated requests:

• Please delete all profiles claiming to be me (with or without the accent on the ‘é’ – last time I looked, I found one ‘China Mieville’, and one more accurately rendered).
• Please do not allow anyone else to impersonate me. I have neither time nor inclination to trawl your listings regularly to see if another bizarre liar has sprung up.
• And while you’re at it, please institute a system whereby those of us with the temerity not to sign up to your service can still contact you on these matters and actually get a [insert cuss-word] answer.

I appeal to you to honour your commitments to security and integrity. Of course as a multi-gajillion-dollar company I have absolutely no meaningful leverage over you at all. If David Fincher’s film doesn’t embarrass you, you’re hardly going to notice the plaintive whining of a geek like me. All I can do is go public. Which is my next plan.

I’m allowing a week for this letter to reach you by airmail, then three days for you to respond to me by phone or the email address provided. Then, if I’ve heard nothing, on 16 October 2010, I’ll send copies of this message to all the literary organizations and publications with which I have connections

some of the many books bloggers I know; and anyone else I can think of. I’ll encourage them all to publicise the matter. I’m tired of being impersonated, and I’m sick of you refusing to answer me.

I look forward to hearing from you.

Yours sincerely,
China Miéville
Posted by James at 13:21

Well, he does have power if he is willing to sue them. That is what litigation is for.

that was just beautiful.

(the letter, not the fake profile thing)

My regards to China Miéville. I have published this version of the letter in the General Discussions forum of our board here: http://www.sapfans.com/forums/viewtopic.php?f=1&t=337386&p=1048236#p1048236

Needless to say, I'm not a fried of FaceBook.

There are a number of other authors who have also been trying to shut down imposter Facebook sites, most notable amongst them George RR Martin (he's also been trying to shut down a Facebook site reposting his blog entries without permission, including copyrighted photographs which have been put up on Facebook without his permission). They have also had little to no luck in resolving the situation through the official channels.

I've looked at the pages. They're Facebook "Pages," not "People" -- neither one claims to BE Mieville. One of them semi-explicitly says it's not Mieville, but it should be clearer.

A number of people mistakenly believe these to be official pages, but I don't think the page authors intended to fool anyone. I don't think these are "sad people," I think they're fans who have been unclear.

Sure wish I'd found your site and China's open letter to Facebook sooner. I actually followed a link from one of his fan pages here to read it. I did several searches and it appears that FB (who I don't like but use as a lesser evil of MySpace to keep in touch with friends not in my city or see rarely) removed the offending profiles.

I feel for him and perhaps his forceful beautiful prose made someone at FB finally open their frakking ears. I'll be on the watch though, should anymore crop up.

Interesting blog - I'll be reading through it.

To the person that said they were 'pages and not people'. No, there were also people claiming to be him. I know as I was on facebook and specifically made friends with one so that I could write on their wall 'this is not the real China Mieville'. Obviously by the time you looked him up, facebook had been shamed into removing these imposters.

I think that there's some persistent confusion here (i.e. among people's reactions to China's letter, not in the letter itself). So China is annoyed at people impersonating him - absolutely fair enough. But having 'liked' a China Mieville facebook page for a while now, I think it's very unfair that people are now flaming the poor fan who set it up. At no point did he 'pretend' to be China - and when I joined I understood that it was not China. True, he maybe should have specified 'fan page' in the name, but now that it has over 100 fans he is unable to rename the page (FB policy). People have written on the page that 'China wants this shut down'. Reading China's letter, I don't think this is true. He is not complaining about fans - he is complaining about impersonators. And if you take even a quick scan of the page I'm referring to, it is clear that no impersonation is being attempted. I'm sure China did not mean for real fans to be made to feel guilty about supporting him on FB, even if they initially overlooked the potential confusion that naming their page 'China Mieville' might cause. Can we have a little understanding, please?

NB: Above frustration not directed at anyone here, but at those who seem to have (perhaps wilfully) misunderstood China's letter. I get the sense that, in some cases, the flamers feel that by acting annoyed at any FB group that bears China's name gives them some kind of solidarity with the author, making them a 'better' fan...?