I had a fine time at the Gollancz party last Thursday. Just about managing to navigate the frenetic London rush-hour and inevitable tube delays, I (eventually) met up with Gav from NextRead near Marble Arch, before linking up with Liz from My Favourite Books and Mark from Walker of Worlds. Together we made our way to the party, braving the sardine-esque crush of the underground. 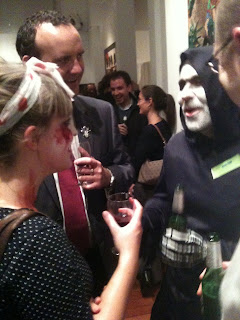 A suitably bloody Chloe from Tor UK, Mark from My Favourite Books (he had rather unnerving eyes that sadly don't show up here), and a ghostly Gav from NextRead.
The Gollancz party is quite the popular event these days, with plenty of industry folk crammed into the October Gallery. As is always the way, it was a struggle trying to find time to speak to everyone I wanted to see, but I managed to grab a few minutes with the lovely ladies from Tor UK, Voyager and Orbit, as well as the fine chaps from SFX magazine﻿/Future Publishing. I was also pleased to meet Rob Grant, creator of classic British SF comedy Red Dwarf. It was also great to see my blogging comrades Wert (Wertzone...naturally) and Amanda (Floor to Ceiling Books), as well as various authors - Stephen Deas, Gav Smith, James Barclay, Chris Wooding and Joe Abercrombie.
I stole this photo from Wert, but I'm sure he won't mind. That's yours truly on the left (with demon eyes that resist any attempt at red-eye reduction, apparently), a rather contrite-looking Gav Smith (with steampunk eyepiece), and blogger Mark Chitty.
After a couple of hours at the October Gallery, the party as usual moved to the Swan pub around the corner (I imagine the casual drinkers in there must have been rather unnerved by Stephen Deas, who was in full Ming the Merciless regalia). ﻿Various things were discussed, with the topic of embargoes cropping up again and again like a bad penny. Wert and I (rather slyly, it must be admitted) ambushed Amy from Voyager and subjected her to a 20-minute verbal assault regarding GRRM and A Dance with Dragons, which it must be said she handled extremely professionally(!).
So all in all, a very enjoyable evening. A special mention must go to Jon Weir, Gollancz publicity guru who heroically pulled the entire evening together and worked hard to make it such a success. Jon was also kind enough to let me crash at his place for what was left of the night, and he bought me breakfast the next morning. In fact, Jon was so good to me that I'm going to repay him by posting a picture of him once he had consumed plenty of alcohol. 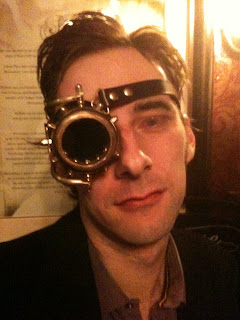 It sounds like all of you had a great time!! Thanks for sharing some pics!!

great write up, thanks James. Glad you had fun. And cheers for posting the picture of me looking like a Steampunk Publicist!