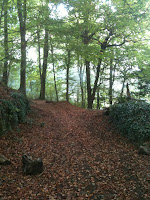 I grew up in a semi-rural area, and spent many hours in my younger years exploring the woodland near my parents' house. Whenever I go back, I always try to steal some time to walk those same woodland paths. I find the solitude of the woods almost intoxicating; it's a priceless respite from the rush and hustle of modern life. I've always found woods to possess a certain mythic quality that harkens back to a more ancient time - perhaps the same sort of quality that inspired the much-missed Robert Holdstock to write the classic Mythago Wood, in which he riffs on the mysteries and secrets of ancient British woodland.

So I was utterly dismayed recently to discover that the UK government plans to sell off much of our precious woodland to private developers, who will then no doubt build adventure parks and golf courses on this old land.

Our forests have been protected by the Magna Carta since 1215, so it's likely that ancient laws laid down over 800 years ago will be scrapped to make way for the sales. The British Isles used to be covered in vast swathes of forests, but over the last two thousand years we've lost most of it. Now we stand to lose a lot of what we have left - hundreds of thousands of acres of woodland, enjoyed by hundreds of thousands of people - just so the government can make a quick buck.

This should not be allowed to happen. I'd urge anyone who feels similarly to sign this petition.
Posted by James at 13:42

The forests and greenswards are more than a national treasure - they are a trust, not owned by individuals any more than by the Crown or the Government. We hold these diminishing links to the natural world of these British Isles in memory of all those who have settled these wooded shores - and in good faith, for all those future generations to come.

To place this priceless heritage up for sale, to lose it forever in pursuit of short-term and short-sighted gain, is an act which will betray both. All those people who have shed their blood and sweat protecting these green and pleasant lands, and those who will depend on it for shelter and succour, will have cause to weep.

There is no book, no debt, no exchequer that exists sufficient to balance such a potential loss. For the forests are the life of the land and the land is the life of its people, tied to us by their ancient roots and the shade they may offer to our grandchildren not yet born.

To let the axe undo in moments the work of centuries; turning those who should be stewards and caretakers of our national woodlands into its auctioneers to the highest bidder, is an act of infamy.

While not a native to the UK, I've lived here now for nearly a decade and am now a permanent resident. My children are British, as were my grandparents on both sides. The woods at our end of the road are a refuge for us, quilted by long-standing hedgerows and fields. They are a break from the often unrelenting urbanity of life and support a great diversity of plant and animal species. There is little enough of the woods themselves which remain; to contemplate their removal - of even an acre of the few surviving stands of older forest - fills me with a sense of loss I can't even put into words.

The current rapacious government seems not content to steal from the living, but must rob the memories of the past and from the future as well. And for what? A brief flowering of greed reaped from the stumps and paved over glades.

I can't believe no one else has anything to say about this. Some blogger jumps the gun on a review and you get 50 comments a day but go on about the UK government wanting to sell off what's left of the island's precious forests for chump change and ffft.

Signing online petitions, while well and good, will do very little. Where is the appropriate online rage? Perhaps we could hire Sam Sykes to pay George Osborne a "visit." Send him the message that he'll be sleeping with the stinging nettles if he keeps this up.

Ah well. Any ideas James, what else we in the UK can do? This is one of those thefts that if the Tories get away with it, they'll (the forests) be lost forever - even after the bums are finally tossed out (I hope that happens at least).

I'm surprised this doesn't have the Earth First brigades out strapping themselves to the trunks already - spikes in hand.

We need some homicidal elves in the greensward, or else the Lady of Lórien - no wonder they kept the humans out. By now they'd have paved it over for a Riddermark theme park with animatronic horse rides and "My Sister Fought A Nazgul And All I Got Was This Shirt" t-shirts.

Eric - great first post, you put it far better than I did.

And I'm afraid that is the online scene for you: people go apeshit over minor details like embargoes, yet don't appear to care about really important things like this. Sigh.

I'm not British, but having just spent a week in the Pacific Northwest, amongst its wonderful forests.. and then having seen what a clear cut hill looks like compared to a wooded one.. flayed is the only word that really describes it.

So I can totally sympathize with you in this regard. I believe it was in his last year of Office that G.W.Bush signed a bill allowing for logging to be conducted in the National Parks of the US. And if I remember correctly, for the dumping of scree from mines and exploration of Coal and Oil to be allowed as well. Essentially ending the protection these natural places had, and these regulations will only continue to be loosened as future administrations get elected.

The Difference being while the US has a proportionally large amount of area that is still wooded, the UK dosen't have all that much left, and certainly not enough to go selling off.

I've never been to your fair island, but it's the first place I plan to visit when I manage that trip across the pond. I can't imagine this even being possible. Your forests and other natural areas are at the top of the list of reasons why so many Americans (and presumably others) long to visit the place we left so long ago.

Can't anything beautiful stand in the face of man's greed?