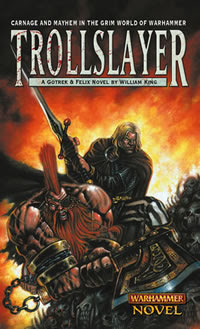 Back in the 1990s I was heavily into Games Workshop, and spent many happy hours getting paint and glue everywhere as I fiddled with the plastic and lead miniatures. Ten or so years on, and my participation in the hobby is no more; not because I've outgrown it (I've not - I'm still an uber-geek) but because of the pressures of time and money.

Yet, while my participation in the hobby ended a while ago, the world and background have stayed with me. Games Workshop have created fantastic worlds for their games and I particularly like the bleak slant on them. For their fantasy world, the elves, orcs and dwarves are all present and correct but you also have steamp-punk and gothic elements, which make it quite diverse. The depths of lore and history that underpins the world is also extremely absorbing. There is a real epic quality to it all.

Given that Games Workshop have published a slew of novels set in their worlds, I thought I'd try some out. Having read a snippet of Bill King's work before, his Gotrek and Felix novels seemed an appropriate starting place. I therefore picked up the first novel in the series: Trollslayer.

Trollslayer is not so much a novel as a collection of short stories. These follow the exploits of Felix Jaeger, a rogue-like university dropout with a silver tongue, and Gotrek Gurnisson, a homicidal dwarf that bears the title of Trollslayer. Gotrek is doomed to wander the Old World in search of an honourable death as payment for a past crime of a terrible nature, while Felix finds himself accompanying the surly dwarf, with the responsibility of recording their travels and, ultimately, Gotrek’s glorious death.

The relationship between the two companions is one of the highlights of the book. The two of them could not be more different, with Gotrek actively seeking battle and bloodshed, while Felix tags reluctantly along, praying fervently for their safe passage. This leads to several amusing conversations and situations, and William King is adept at portraying Felix’s unease and panicky response to battle, as well as his failure to understand fully the violent streak in his dwarven friend. Gotrek by contrast, savours the violence of battle, and can’t understand Felix’s reservations. Their different backgrounds and race traits make them a mismatched pairing, frequently at odds with one another and unable to understand their respective motivations.

Gotrek’s desire for the ultimate opponent leads them all over the Empire, from dark woods infested with beastmen, to deserted dwarven cities teeming with goblins. The action is thick and fast, with the two companions often caught up in desperate battles, and nefarious plots. King certainly knows how to keep the narrative going, and there is barely time for Gotrek and Felix to grab a breather before the next wave of mutants/beastmen/undead races towards them.

Each story begins with a short preface in the first-person by Felix Jaeger, which gives the impression that the story that follows is drawn from his own memory, lending the writing an almost personal quality.

In an age where fantasy writing more often than not tends to lean towards the complex and epic, it is hugely refreshing to read a book that is not big and not overly clever, but is instead an enjoyable read that often races along at a break-neck pace, with lovable characters and plenty of action and adventure. Now that the Felix and Gotrek novels have been released in two omnibus versions, you can get three novels in one volume for a reduced price. Trollslayer is the first novel in the first omnibus, alongside Skavenslayer and Daemonslayer.

If you like your heroic fantasy fun and fast-paced, you could do a lot worse than pick up Trollslayer and join Felix and Gotrek on their adventures through the Old World.