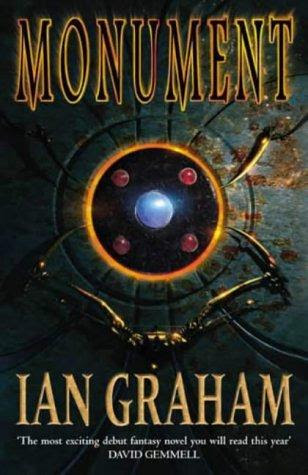 Let me tell you a story.

Way back in 2002, a book called Monument was published by Orbit, here in the UK. Written by first-time author, Ian Graham, it followed the story of a man called Ballas. Most protagonists in fantasy novels are good-looking, courageous and honourable. Ballas wasn't. He was a bastard. He was big, ugly and overly fond of his drink. When a priest saved him from a beating, Ballas stole from him. In short, he was one of the most repulsive anti-heroes you'll ever meet. And this is what made the novel so great. Well, that and Graham's wonderfully visceral prose and the bleak world he created. I loved Monument. I don't tend to re-read books, but Monument was an exception. When I heard that Graham was working on a new novel called Blood Echo, I waited impatiently for the novel to be released.

In fact, until an hour ago I was still waiting. My emails to the publisher had been met with vague reassurances that the novel would surface at some point, but deigned to say when. As the years passed, I started to wonder what the hell was going on. Monument had generally been well-received, and it seemed odd that after making a strong impact a new author should just disappear off the radar. Internet searches yielded nothing. It seemed that Ian Graham had just vanished. I never lost hope that Blood Echo would appear, but got to a point where I severely doubted it.

Then, tonight, everything changed. I was thinking it was time to do another 'crap fantasy book cover' feature, so was hunting around the internet. I vaguely recalled seeing the American artwork for Monument a while ago, and thinking it was a bit naff, so I googled it to check it out. Seconds later I found myself looking at a photo I'd never seen before, yet I recognised the guy in it. It was Ian Graham. I glanced at the link. No, I thought. The link was for a site called IanSGraham.net, and there is no 'S' in the guy's name. Then I realised the images of the Monument cover that the search also brought up shared the same link.

After all this time, a website for Ian Graham. A new website. But far better still, information about what exactly the hell had been going on. Turns out that Ian scrapped Blood Echo, as it wasn't working. Quite a brave move by him, as he must have known the delay it would cause. But credit to him, he realised the character and plot were not working and so he made a big decision that I'm sure is for the best. Then the best news ever: he's working on a prequel to Monument, featuring Ballas again.

Why am I telling you this? I don't even know. It has just made me extremely excited and I had to share it with someone, so you guys drew the short straw I'm afraid. I've always championed Ian's work, and it kind of depressed me that so many readers of the genre hadn't heard of him. Hopefully now he'll receive some of the attention he deserves.

I'm going to re-read Monument and will post a review as soon as possible. In the meantime, here's the link to his new website: http://www.iansgraham.net/Home.aspx
Posted by James at 23:58

Sounds exciting. I'll have to check out Monument.

That's about how excited I was when I heard C.S. Friedman was coming out with "Feast of Souls" but I haven't gotten around to picking it up yet.

You've just solved one of the 'Great Unsolved Mysteries' of Fantasy! ;o) I really should read 'Monument' at some point...

T.D - Monument was published in the States, so you should have no trouble getting hold of it. The American cover is bluey-purple with a nicely-drawn but hideously stereotypical wizard on it. Suffice to say, it has nothing to do with the plot.

Graeme - Thanks, do I get a prize for solving this particular mystery? And yes, do check Monument out, it's a really good novel. Well, I think so anyway. :)

Yeah I looked on the link you posted at the 3 covers (in the Art section) and marveled a bit at how weird the US cover was in comparison to the other two.

For another good comparison of cover art across the pond, check out Greg Keyes' The Briar King. Though the US art does kind of (sort of) depict something possibly having to do with the story, it mostly makes me think of a bewildered trailblazer whereas the UK cover art (very simple with a tiny picture of a burning fortress) is a bit more indicative.

We Americans should pretty much just give up on the alternative cover art concept.