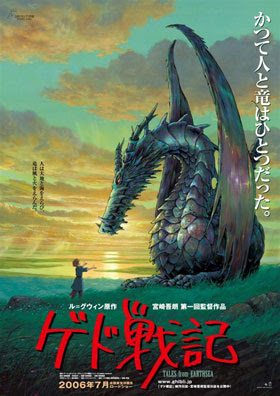 After the disappointing TV series based on Ursula Le Guin's A Wizard of Earthsea, I was interested to see if Studio Ghibli could do any better. Studio Ghibli has forged an impressive reputation thanks to the superb quality of their animation and direction - the latter largely due to mastermind Hayao Miyazaki - as well as the thoughtful, emotional nature of their films. Having created masterpieces such as Spirited Away and the epic adventure Howl's Moving Castle, Studio Ghibli seemed well placed to deliver another stirring adventure in Tales From Earthsea. I certainly had high hopes; while not a massive fan of anime, I have nonetheless enjoyed the Ghibli productions I have seen so far and can appreciate the superb animation and production of their releases.
So it was a bit of a surprise to find that Tales From Earthsea falls well short of the standard I think we've all come to expect from Studio Ghibli.
The main problem with Tales From Earthsea is the storyline. I've only ever read the first book in the Earthsea series and that was a long time ago, but nonetheless I can remember fragments. Subsequently I hoped Tales From Earthsea would follow the storyline of the first book, where Ged the farmboy becomes a wizard. Instead the film follows what is allegedly a plot cobbled together from the third and fourth books in the Earthsea series. The result is an uninspiring tale about Ged (fully-grown) and Arren (a young prince who murdered his father) teaming up to defeat the evil wizard, Lord Cob. The disappointingly predictable plot plods along and only really gets going towards the end of the film, by which point I was past caring. Ghibli is known for its warm, distinctive characters but those in Earthsea feel strangely lifeless; there is no real spark. Arren's inner torment is not really illustrated enough, nor for that matter is Therru's. The only character that makes any real impression is the uncomfortably androgynous Lord Cob, excellently voiced by Yuko Tanaka.
Even the animation is a pale imitation of Ghibli's usual excellence; there are some nice backgrounds and the dragons are superbly done, but the usual atmosphere that Ghibli visuals evoke never really materialises. Earthsea is portrayed well enough, but doesn't sparkle as it should. Alongside the visual mastery of fantasy adventure Howl's moving Castle, Earthsea pales hopelessly in comparison.
Perhaps the failings of Earthsea are down to the fact that the film was directed by Goro Miyazaki, son of the renowned Hayao, and that it is his first film. Whatever the reason, there's no hiding the fact that Tales From Earthsea is a big disappointment. The fact that Le Guin herself commented "This is not my book"after watching the film indicates that she wasn't impressed either.
With the failures of the earlier TV series and now Ghibli's Tales from Eathsea, fans will have to wait longer for an adaption that does the series justice.
5/10
Posted by James at 14:34

For as much as Fantasy seems to dwarf the literary environment and SF takes more of a back seat, the video entertainment world seems to be completely the opposite. I find myself aching for video fantasy so often I will even watch crappy 80's movies to get my fix (and wish that Willow was more than just a screenplay) and buy things like the Earthsea live-action show thing on DVD.

Being a decent anime fan, I can honestly say that a LOT of storylines "fall short" in the way you're describing here. Most series' are based on the manga and lose a bit of their substance even if they retain their great style.

Not sure if you're into unsolicited recommendations but if you want to see a high-budget anime film that pays off, check out Karas: the Prophecy (I'm hoping to watch the sequel after Lent ends). Great mix of CG and hand-drawn, story is a bit confusing unless you watch it twice, and it has a fantastic mix of swords & guns & magic.

I'm of the opinion that most people who "don't like anime" rarely scratch the surface of what it truly is. Not that I'm discounting you at all, I just think the crap (like Dragonball-Z) that gets "ported" over gets more recognition than the quality stuff like Cowboy Bebop and Angelic Layer.

...sorry to have hijacked your topic.

Don't be sorry T.D, that was a great post! I agree that in the film world there's no doubt that sci-fi is far more successful than fantasy. With the exception of LOTR, there are few decent fantasy films out there (at least the epic/heroic fantasy variety).

I may well check out Karas; thanks for the recommendation. It certainly sounds cool, and I'd like to explore anime a bit more.

I agree that LOTR was a huge leap forward for fantasy-on-screen but SF has it's own answer to the epic trilogy (Star Wars FTW!, as fan boys would say). I think LOTR was possibly on screen because frankly there really wasn't THAT much "magic" in it. I wonder why there is such a dwarfing; it's not like laser beams take more special effect talent than fire spells, right?

It's a really interesting topic. I'm not sure why fantasy has suffered so badly in film, but I think there were some early fantasy films that were really poor and to some extend they killed the genre commercially. I don't think LOTR will make it any better for fantasy, as many studios will surely be put of epic fantasy for fear of the inevitable LOTR comparisons. I hear that Terry Brook's Elfstones of Shannara is in the works though, so we'll just have to wait and see.

If you read Terry Brooks' Lessons from a Writing Life he basically details his disdain for all things Hollywood (as far as novelization and movie rights) so I will be shocked if his stuff ever makes it on screen.

I'd agree with you on the "bad fantasy movies" point except for I've seen Barbarella and Flash Gordon. I'll admit that Star Trek and Star Wars have given the genre a bit of a lift (not to mention Battlestar) but I think therein lies the problem; studios are willing to spend money on SF but not fantasy. Fantasy is kid stuff, Disney's realm, kind of like the stereotype slapped on video games. Maybe we'll see that start to lift (as the games one has, recently, by leading the way to new technology) in the next few years.

Frankly, I would rather see animated versions of Fantasy books than live action (especially if they're anything like Earthsea with Danny Glover). The Forgotten Realms novels would make excellent targets for animated series' but, again, that's been more stereotyped to Japanese stuff. It's an untapped market and someone just needs to step in with the cash and make it happen.

I've read Terry's book Lessons From a Writing Life, and after the nightmare he suffered with Hook I wouldn't blame him for never going near Hollywood again. However, the script for Elfstones is being written by fantasy author Eldon Thompson, and it apparently has Brooks' blessing. Whether it'll ever see the light of day is another matter entirely.

Oh, that'll work then, if Brooks himself isn't actually working with the Hollywood types. I'll have to look it up later on (and, probably, pick up those books to read at some point).