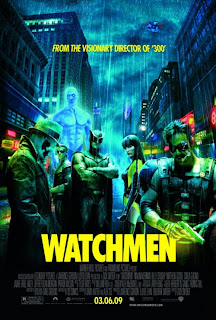 Finally got around to seeing Watchmen yesterday, so thought I'd just post my thoughts on it while they're still fresh in my mind.

All things considered, I found Watchmen to be a bit of a mixed bag; I really liked certain scenes/aspects/characters, but disliked others. For example, I thought Rorschach and The Comedian were brilliant and that all of their scenes were gripping and well-handled, while I found Silk Spectre II and Nite Owl to be pretty dull and monotonous in comparison. The worst moment of the movie for me was the sex scene - awful choice of music, made even worse by the flame thrower as a sexual metaphor. Bad.

While I think Snyder has done a commendable job with this film (in the sense that it must have been really hard to translate the novel onto the screen), I think the end result proves that the novel is more or less unfilmable. The movie is a rather disjointed bunch of narratives that never really sit comfortably alongside each other and lack cohesion.

There are some excellent scenes and ultimately I did enjoy it (despite its cumbersome nature), but I did leave the cinema feeling a little underwhelmed.
Posted by James at 14:05

Novel? you mean the Comic...

Yeah, comic, novel, etc. I've seen it referred to as both a 'novel' and a 'comic' and given that I have very little experience or knowledge when it comes to this sort of thing, I wasn't sure how fans like to refer to it.

I agree. I knew what was going on, having read the book, but the people I went with both had a terrible time following it. They liked individual things, (including Rorschach), but on the whole it was far too disjointed for them. They also felt that it was too long and intellectual; they wanted more action.

It's always difficult to adapt a book into a coherent movie. I agree with you that Snyder did a decent job, but he didn't quite hit the mark. Perhaps the director's cut on DVD will fill in a few of the gaps.

I read the graphic novel before. I liked most parts of the film. From my point of view Snyder did a good job.
Anyway for me the movie wasn't long enough. I look forward to the long DVD version (more than 3 hours). And I also want to see THE BLACK FREIGHTERwhich is the comic inside WATCHMEN.
In the meantime I read a lot of comments from people form different countries. And there was one big difference between comments from USA and the "rest" of the world. Nearly every comment included a phrase about the blue penis of Dr. Manhattan.

I hadn't read the graphic novel before seeing the film, so I went in cold, in a manner of speaking. I found no trouble following the narrative; in fact, I thought the narrative structure was handled beautifully by Snyder, and the heart of the story came across powerfully for me. The film definitely warrants a second viewing to get an even better handle on all that happens, but what these Watchmen represent (individually and collectively) was fascinating and provocative, particularly as they struggle in a dystopian world bent on its own destruction and on hamstringing those who would choose to save it. Visually, too, I thought the film was magnificent.

I will say that I'm certainly eager to read the graphic novel now. :-)

It was just bad... Not even the individual characters save this movie!!!! Worst 2h and 40m in the movie ever!