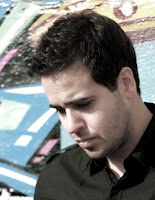 There's a healthy buzz growing around Mark Charan Newton. His major-label debut Nights of Villjamur is already being touted as the debut of 2009, despite not even having been released yet. Only time will tell as to whether it deserves that moniker, but one thing I can safely say - having already read and reviewed Nights of Villjamur - is that Newton is one of the most talented and promising authors to emerge from the UK in recent years.

Mark very kindly agreed to write a guest post for Speculative Horizons, so here it is.

Nights of Villjamur will sit on the shelf as an epic fantasy, but the series is called Legends of the Red Sun: with that, it’s a conscious contribution to the Dying Earth subgenre.

Many a young whippersnapper may ask, “So what the hell is the Dying Earth genre about?” And they’d be quite right to bring it up – there have not really been many novels steeped in this tradition for some time. I don’t want to discuss individual works too heavily, so I decided to use James’s kind invitation for a guest blog post to give only a brief outline and history for those people who have never heard of it.

Although I’m concerned with the business of genre taxonomy here, there are a few things worth noting that sets it apart from other sections of the genre. For one, the setting is consciously towards the end of time, not merely after any particular major event (possibly after several dozen events in fact). The genre is more fantastical, I suspect. It is very much a secondary world creation, and by that I mean there is less of a reliance on current realities for the infrastructure of the world. There is certainly a melancholy associated with the setting, a conscious reflection at how great things once were. A sense of fatality. There’s a mix of technology, too – the fantasy isn’t merely limited to magic, and the magic is intended to have more of a justification, often through science.

People point towards H.G. Wells’ The Time Machine as one of the origin novels. Later, Clark Ashton Smith’s Zothique stories, set on Earth’s last continent, began crystallizing the genre. Published in the 1930s, they were some of the first works to explore the cycles of cultures moving forward into a deeply unrecognizable fantasy future.

But we most likely didn’t start recognising the genre as such until a certain Jack Vance (influenced by Smith) wrote his Tales of the Dying Earth. 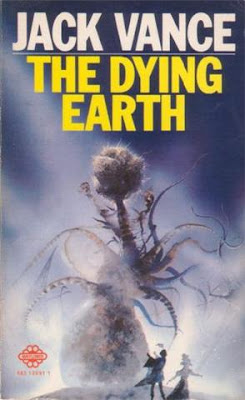 Finally we had a name for this thing. Some of these earliest stories were first published in the 1950s, and upon first reading are a surreal and heady collection of images. Cugel’s Saga is often seen as the most popular of the later works, first published in 1983, but Vance’s wit and dynamic style proved intoxicating, and the stories became iconic. For more detail, check out The Wertzone’s review. (There is also an anthology released later this year called Songs of the Dying Earth, edited George R. R. Martin and Gardner Dozois, which is a tribute to Vance’s novels.)

Gene Wolfe, influenced by Vance, wrote what is commonly thought to be one of the high points of Twentieth Century science fiction and fantasy – fuck that, of any literature. His original quartet was called The Book of the New Sun, and was laced with mythical and biblical imagery, and more symbols than you can shake at Aleister Crowley. The tales of Severian the torturer and his journey are established classics, and cannot be done any justice in a pithy paragraph.

Larry’s collection of in-depth postings on the series is one of the best studies of the books online.

Out of the Dying Earth subgenre, one of my favourites is M John Harrison’s Viriconium sequence. In fact, I made a conscious nod of the respect in my title to one of the books, Viriconium Nights / Nights of Villjamur. These stories are almost anti-fantasies. The city of Viriconium changes consciously (even its name to Uriconium), deliberately avoiding the ability to be mapped. The world possesses the technological litter from thousands of cultures previously. It is a bleak vision, but spellbindingly surreal and with a beautiful and complex prose, and there’s something very English underneath it all, which sets it apart. This is not a literature of comfort, and it requires more than a couple of readings to discover the treats within. These stories have been divisive amongst the SFF community, people either love them or loathe them. See the Westeros forum.

There are many other books and series that will fall under this category, and if anyone wants to add to my reading list, please feel free in the comments section. I merely wanted to outline a few of the major works. And maybe in writing this, a few readers might go and order some of these wonderful books.

Specifying what it is about these books that appeal to me as a writer proves rather difficult. Perhaps it’s their melancholy fatalism: these settings all possess a vastly different psychogeography from other fantasies. Perhaps it’s the fact that the setting opens up more options – that the literature has more freedoms, more potential for meaning than a setting that reflects backwards.

It’s worth adding that none of these books would likely be published as new novels in the modern era by conglomerates. Publishing tastes and sensibilities change by the year, of course, and commercial pressures are vastly different now than they were then – for better or worse.

This fan boy recognises this, probably wouldn’t have been published unless he did, but I’ve made scattered references to these stories throughout Villjamur, in a few structure names, or the colour of a cloak, all out of respect for what’s gone before.

In trying to help resurrect the Dying Earth subgenre, and put a distinctly modern spin on things, I may well be standing on the shoulders of giants, and that may well be ambitiously stupid. However it’s difficult to resist the allure, because the view at the end of time is amazing.

Many thanks to Mark for his excellent article. I've read precious few novels of this fascinating genre (the most recent of course, being Mark's Nights of Villjamur). I'm hoping to rectify this gap in my genre reading, and have ordered the first book in Gene Wolf's Book of the New Sun sequence...

For more info on Mark and Nights of Villjamur, check out his website and blog.
Posted by James at 19:57

The idea of a Dying Earth resurrection (like the pun btw) is an inticing one. I'm a huge fan of Clark Ashton Smith (I'd rank him as one of the great Weird originators) and my own writing is to an extent also coloured by these images of the decadent last days of twilight lands under guttering suns.

Wolfe's an author whose works I've yet to read but I've just ordered a copy of 'Severian Of The Guild' - looking forward to getting started.

A great guest post Mark! It's good to see a new author that has such an awareness of and respect for what's gone before. It's a great thing in Weird fiction, I think, to be moving forward but also to reconnect with the roots of the genre.

Thanks, Alex. Hope you enjoy Severian! It's a wonderful book - read it leisurely, and great treasures can be found...

I think respect for what's gone before is a good thing - these writers have helped craft and sustain the SF/F genre. Without them, we wouldn't have the kinds of books we have today, that's for sure.

Although I already read Wells' The Time Machine (which I really enjoyed!), I didn't know about this Dying Earth genre.
Mark's post made me curious about Jack Vance's The Dying Earth and more books from this genre.

Hm, I wrote the beginning of a short story set in a post apocalyptic Earth, but I think it can't be included in the Dying Earth genre. :P

Could this be some weird simulation/simulacra tech from a superluminal entity that is interacting with our 2-dimensional wafer from 3 trillion light years out?